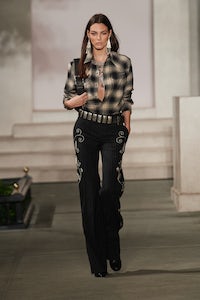 NEW YORK, United States — Over the past three days, the team at Ralph Lauren was busy constructing bleachers outside the entrance of the designer’s Madison Avenue flagship and enclosing them with 75 individual glass panels. The goal was to create a “jewel box” that housed a makeshift runway, where the designer presented a second Autumn/Winter 2016 collection on Wednesday night. Clients who attended the event, which forced the closure of a block of Madison Avenue for the evening, were able to shop 150 items immediately at Ralphlauren.com, and also in direct-retail stores from Los Angeles to Hong Kong. Retailers including Bergdorf Goodman, Saks Fifth Avenue and Mytheresa.com were on board as well.

The initiative fits nicely into newly minted chief executive Stefan Larsson’s "Way Forward" manifesto, which he presented to investors in June 2016. The idea: peel away layers of management and think more like the fast-fashion giants eating into the brand’s business, such as H&M, where Larsson cut his teeth before turning around the business at Gap, Inc-owned Old Navy.

For a company with the means and reach, why not show a collection in-season and make it instantly shoppable? At this point, nearly a week into the first season of designers showing ready-to-wear that's ready to buy, the concept is starting to feel more natural, more par for the course.

However, in order for the approach to work, the clothes need to be irresistible. Larsson’s plan also includes renewed emphasis on the products and ideas that make Ralph Lauren the most beloved lifestyle brand in the world. That strategy was in full effect tonight, with a collection that was an ode to the American West. Mr. Lauren sent the models — including longtime industry favourites Stella Tennant and Carolyn Murphy — down the city sidewalk in looks that embodied that theme: embroidered cowboy shirts and pinstriped trousers, sequin blazers, dresses laid out in a Southwestern motif and plenty of buffalo plaid.

But a theme can easily turn kitsch. The sequinned dresses that closed the show — held up in the back with a studded-leather harness — felt like something from a bygone era, as did the purple satin suiting that preceded it. What looked relevant for today was the outerwear. In particular, a hand-distressed leather shearling coat inspired by the designer’s own ranch coat, a cream wool-cashmere wrap coat embroidered with in black sequins in a southwestern motif, and a worn leather jacket with football padding. In order for Ralph Lauren, the brand, to indeed move forward, Mr. Lauren, the designer, will need to focus on what it really is about him, and his lifestyle, that people admire. Consumers these days are too smart for themes. They want authenticity.