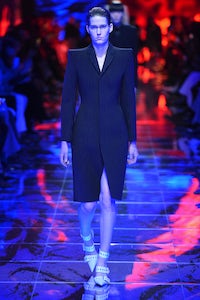 PARIS, France — Aside from producing the most mind-blowing runway photographs of all time, Demna Gvasalia’s presentation for Balenciaga on Sunday birthed a beautiful friendship. He met Montreal-based artist Jon Rafman at Art Basel, liked what he was doing with immersive video experiences, and from that sprang the collaboration that delivered Sunday’s show, models walking through tunnels of video screens (2000 square metres of them) on which waves waved, lava flowed, planets formed then melted, and the audience dissolved into a cosmic soup.

Gvasalia’s partner BFRND delivered a soundtrack of techno so symphonic it could surely be heard on Alpha Centauri. It was the most overwhelming confluence of fashion and technology I’ve ever experienced. Which was, of course, the point: EXPERIENCE!

“A show has to be strong,” Gvasalia told me recently. “I have 15 minutes to tell these people what Balenciaga wants to tell after six months of work…Every silhouette we show, our priority has to be modern beauty and modern elegance and what they represent.”

I had no idea what he had in store for his audience, but as the extravaganza exploded around me, as I felt the earth move under my feet, Gvasalia rose to his challenge. From the squarest and most forceful of shoulders at the beginning to the fluid but equally insistent definition at show’s end – “neo-tailoring," Gvasalia called it — he offered a master class in shape, appropriate for the man bearing Cristobal Balenciaga’s torch. “Tailoring as comfortable as wearing a jogging suit?” wondered one potential client. “That’s the holy grail.”

More than that, though, was Gvasalia’s effort to reclaim glamour and elegance, which he described as “words which seem taboo today." Odd, given its current status as one of the top fashion brands in the world, but there was something almost old-fashioned about Balenciaga in its reverence for the drape of a gown in ruby duchesse satin, or the same fabric, in a shade of deep emerald, cocooning a model’s torso. Old-fashioned because it was the embodiment of a fantasy of dressing up, dreamed by a boy in Georgia decades ago.

That was also the root of all the square-shouldered tailoring, hyper-acute for men and women. Strength through dress. Maybe he found the seeds in Cristobal’s archives, but Demna watered them with his own wants and needs.

What became crystal clear here was that Balenciaga is not a project Gvasalia will remould according to his whims. Instead, he is polishing and perfecting, refining a world. His models looked like replicants moving impassively through Jon Rafman’s kaleidoscopic, disorienting digital tunnels. Welcome to the Matrix.

But then Gvasalia inserted a gambling subtext – a print of playing cards, another of dice and dollar signs – and there were those fabulous saturated colours, and the sinuous decadence of a short, second-skin, sweetheart-necklined LBD, and the simple human pleasures of the flesh reasserted themselves. Fashion saved him once. Now he’d like it to save all of us. And that's EXPERIENCE.