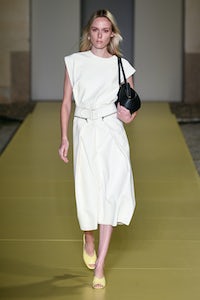 MILAN, Italy — What is a fashion film? Really, what exactly is this form of expression? It is not a real film, as the clothing must be seen. It is essentially like an advertising clip, and yet the word ‘film’ suggests something, erm, more pretentious.

Salvatore Ferragamo enlisted no less than Luca Guadagnino of Call Me By Your Name fame — and probably the most-liked director in fashion-land, having collaborated with practically every house, all seemingly hypnotised by the empty gloss of his cinematography — to create the eight-minute intro to the brand’s show today.

Watching al fresco under the porches of the Rotonda della Besana was quite enjoyable, but the ‘film’ itself, with its close-ups of the bags and the shoes, needlessly dramatic music and models walking on the empty streets of Milan like they were strutting down a catwalk, staring intensely into the camera, was laughable: a predictably glamorous take on Hitchcock tropes, because Alfred Hitchcock was the main inspiration on the moodboard of creative director Paul Andrew. You know, the icy cold femininity of Kim Novak in Vertigo and Tippi Hedren in The Birds.

As a creative exercise, it was overly literal but thankfully the clothes were not. Andrew is a fierce modernist, so he did not fall in the trap of early-60s replicas. He is icy cold, too, but in another way. This collection, created under the pressures of lockdown, benefited from a vigorous forced trimming: a mere 30-something silhouettes, between women’s and men’s wear, all made in rich, gorgeous colours and richer leathers and other tactile fabrics.

The men’s looks were sharp and functional; the women’s wear was sharp too, and, compared to previous seasons, decidedly more sensual, with an accessories accent on curvaceous heels and curvy handbags. Overall, it was fine. Further upping the sensuality factor would have been great. But the fact that Ferragamo put on a show at all, given the current situation, was admirable in itself.