Audacious styles like these were made for such a large stage, as was Olivier Rousteing, who exuded the confidence of a pop star when he took his final bow. 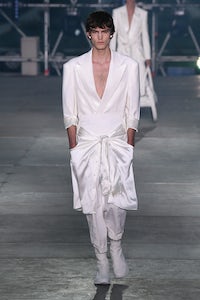 Audacious styles like these were made for such a large stage, as was Olivier Rousteing, who exuded the confidence of a pop star when he took his final bow.

PARIS, France — The concept may be vital, but the phrase “diversity and inclusion” has been commoditised: transformed into a talking point for marketers. Balmain designer Olivier Rousteing seems to be a little annoyed by this. “Everybody’s talking about inclusivity and democracy, but let’s do it literally,” he said backstage before his runway-show-cum-music festival, which took place on Friday in the Jardin des Plantes on the Left Bank.

In order to live those words he so deeply believes in, he invited 2,000 people to celebrate Balmain and see a performance by Darren Criss, the actor who won an Emmy and a Golden Globe for his work in the anthology series "The Assassination of Gianni Versace: American Crime Story." (The show — which was more like a music festival, with its food trucks and beer lines — happened to coincide with France’s Fête de la Musique, a country-wide celebration of the longest day of the year.)

It was no surprise that Rousteing’s kids strode down the stage smelling of the 1980s, referencing just about every flashy trend of that era, many of which Versace popularised. He said the visual flood of 101 looks were inspired, in part, by Richard Gere’s wide-shouldered silhouette in "American Gigolo." (Gere was mostly dressed by Armani in that movie.) What distinguishes Rousteing’s leather tracksuits, giant lapels and pastel satin from the past might be their slickness. Like the shows he watches on Netflix — Stranger Things in particular — it’s a fantasy of how things were, not what they actually were.

Everyone knows that Balmain is super expensive, and the silhouettes are so exaggerated that anything beyond a logo sweatshirt seems difficult to make look convincing on the street. But the thing most noticeable about this show was that the kids modeling looked like they were enjoying it. Audacious styles like these were made for such a large stage, as was Rousteing, who exuded the confidence of a pop star when he took his final bow. He was having fun, and so was the audience, and so will the people who buy these clothes.