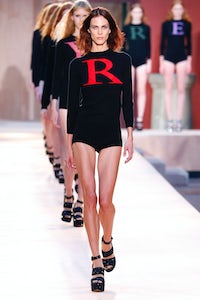 PARIS, France — Julie de Libran finished work on her spring collection in July, so the news of Sonia Rykiel’s death on August 25 required a re-conceptualisation not of the collection but of its presentation. Sonia’s shows were notable for their chatty Parisiennes gabbing their way down the catwalk, not like the frosty mannequins on other runways.

De Libran couldn’t quite swing that groove (the fraught youngsters de nos jours don’t do catwalk chat) but she managed a sensitive tribute to the flame-haired doyenne with an opener that featured models in sweaters that spelled F-O-R-E-V-E-R-R-Y-K-I-E-L. And then, to her credit, she staged a show that was all about her uncompromised vision for the future of the house, minus any last-minute “respectful” add-ons.

De Libran said Rykiel always loved when the house spoke about her. “Every day, she wanted people to tell her how beautiful she was and how everything she did was fantastic.” You might imagine that could be a little wearing, but Rykiel was a rare bird, a woman who, when I once told her she was a witch, took it as the compliment I intended. (I did, I swear.) Not the kind of person you said “no” to.

If de Libran’s collection was an update of the original easy, breezy attitude, she pushed it with her exaggerated volumes. “I wanted the collection to be about workwear, but making that discipline very feminine.” Huge top-stitched sailor tops over even huge-r top-stitched navy pants, jumbo work-shirts over more of those pants, generous smocks and parkas… no one could say de Libran lacked the courage of her super-sized convictions.

She brought the curtain down with tiered, empire-lined, raw-hemmed outfits which suggested a hard-times re-purposing of curtains and sheets, the very opposite of Sonia’s own body-limning knitwear. A brave, even defiant, effort to re-position the house in the wake of its founder’s death, but not one that was entirely successful.