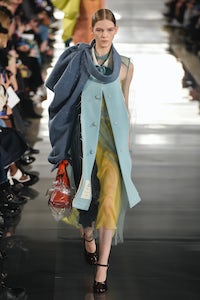 PARIS, France — One of John Galliano’s greatest compatibilities with the man who founded the house he currently heads up is the eternal life in his clothes. At Maison Margiela, no dress is ever really gone. Maybe it’s born again as something else. Or maybe it assumes an afterlife as a ghostly layer of tulle. Now, at least, it has a name: Recicla. The charity shop finds which would once have been copied and included in the collection (the essence of Martin Margiela’s Replica initiative), will now be recycled, upcycled, refreshed from their original state. “Giving a loved piece another life,” as Galliano described it in the podcast which is now the star accessory of his shows, though this season it was hard-pressed by the bags the models carried. Proper wicker baskets!

It’s a measure of how familiar Galliano’s most outré experiments with form and fabric have become that the mumsiness of a wicker basket could seem like the most subversive thing on a catwalk strewn with his usual taking apart and putting back together. But the designer had noticed the edgiest kids in his studio dressing very conventionally. On them, beige was an outrage. Perhaps it’s a case of what’s left but the frisson of tradition when you’ve exhausted yourself at the outer limits of style. There was certainly something of that in the Margiela collection. “A hankering for heritage,” John said. There were boy scouts in his show. Décortiqué, maybe, but recognisable nonetheless.

The frisson of tradition explains Galliano’s ongoing fascination with the dress codes of the bourgeoisie. A born rebel, he has a lot to work with when he takes on middle class mores, even as he mutates them beyond all sense of recognition or propriety. A “gentleman” in a bowler hat and trench was bare-legged. Other trenches were freeze-framed in the act of being othered. lace became a lattice of holes, sequins were scallops of fabric. A tasselled loafer was Tabi-ed, with a bifurcated toe (shoe of the season, say I). And yet Galliano claims that it’s the spirit of belonging that attracts him, whether to a social class or a boy scout troop. That clarifies the intensely poignant edge in his work, in full effect on Wednesday. He's made Maison Margiela his sanctuary, the place he belongs.