With a twisted energy that felt fresh and relevant, the designer is the right fit for rebooting Diesel, writes Angelo Flaccavento. 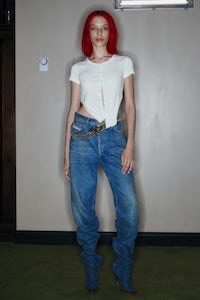 With a twisted energy that felt fresh and relevant, the designer is the right fit for rebooting Diesel, writes Angelo Flaccavento.

Back in the late-90s, any hipster worth his or her salt wore Diesel jeans. But a few years into the new millennium, the Italian denim specialist turned multi-billion dollar lifestyle giant lost its edge and, despite the efforts of creative directors like Nicola Formichetti, never managed to recapture its cool. Now, founder Renzo Rosso is betting on Glenn Martens, probably the most accomplished designer of his generation and a true original, to get things back on track.

Martens debuted his first full collection for Diesel with a co-ed video that was part of the Milan men’s fashion week calendar. It was a solid and multifaceted outing with a feisty spirit and the right amount of kitsch and deliberate bad taste. Martens focused on denim and built the rest of the Diesel world around it, playing with upcycling, artisanal touches, dashes of glitz and multi-functionality. A couple of bags that could be worn as skirts looked functional with the kind of sardonic humour Martens is so good at. The upcycled pieces, in particular the coats made from recycled parcels, were smashing, if probably hard to put into mass production. And the jersey items felt both easy and inventive. There was scope and vision to it all, and the trippy video filmed by Frank Lebone just added the perfect amount of visual dizziness.

What makes Martens the right fit for Diesel is his playful vision and his twisted take on things. Today, he managed to imprint himself on Diesel without making it look like his own label Y/Project. There was an immediacy and a deranged kind of fun to his approach that felt fresh and relevant, allowing customers to play with the products they buy, which is where fashion is going right now.