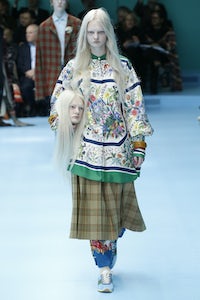 MILAN, Italy — Trolls shriveled with incomprehension during the livestream of Gucci’s show on Wednesday afternoon. It was Alessandro Michele’s most confounding excursion yet, an astonishing 90-look challenge to any kind of orthodoxy, social, sexual, scientific. There was beauty, there was madness, there was horror. You also want to say all forms of human life, but this was a post-human extravaganza. Also, post-traditional notions of gender and feminism.

CYBORG, he called it. The invitation was a digital timer counting down the seconds to the show, a ticking time bomb. The set was an operating theatre, sterile hospital green, under a mirrored ceiling to bounce light back on the procedure. There was bleeping. Ominous. We sat in plastic chairs, like a hospital waiting room, watching while fashion’s Victor Frankenstein stitched together new life forms. Michele called it “a way of ordering confusion." His, maybe. I'm not sure how much clarity he left his audience with.

He had a manifesto, “A Cyborg Manifesto”, actually, penned in 1984 by feminist Donna Haraway. It rejected the boundaries between human and animal, human and machine, physical and non-physical, opting for affinity, not identity. In simple terms, nothing is pre-determined (in fact, pre-determination is merely the tyranny of dualism). You choose.

As abstract as that sounds, it’s the extraordinary heart of Michele’s Gucci. Trolls can squawk all they like about thrift shop this and rip off that, but Michele’s goal transcends such banal navel-gazing. He talked about “the relationship between being and becoming." I’m not even sure why he’s a fashion designer. He was insistent that “clothes can support you while you develop an idea of yourself," but it seems there would be other more gratifying avenues to explore on his — and our — path to enlightenment. Still, one thing I’m utterly sure of is that I’m glad — for our sakes — he’s doing it this way.

Where to begin to make sense of this collection? Fuck that. In a post-show press conference, Michele singled out elements that illuminated the thought processes that dictated the whole shebang. The suits his father bought when he worked for Alitalia. The Inuit, maybe something to do with his anthropologist partner’s work in the Arctic Circle. The turbans of the Sikh cab drivers in New York. Old Hollywood, an enduring obsession, embodied in the fringed, beaded headgear of silent movie vamp Theda Bara and the Paramount Pictures logo, revisited in sequins and swathed in red ostrich feathers. Major League baseball logos. And, most peculiar and macabre of all, a collaboration with Makinarium, the visual effects company and monster shop that is the Italian equivalent of Peter Jackson’s Weta Workshop in New Zealand. Two models carried perfect simulacra of their own heads. Others carried a snake and a chameleon. And one was nursing a baby dragon. “People can transform themselves,” he explained mildly. “They can be parents of dragons, not just children.” Feel the fistbump from a few million Daenerys Targaryen acolytes.

Everything is possible. It’s a glorious pipedream in the slipstream of Parkland and a hundred other horrors. Or is it a dream? Michele described his job as “inventing possibilities." The magic he made was impressively casual: the girl with the dragon, Pan with the faun horns, the model with a third eye glaring from mid-forehead.

Steve Mackey’s soundtrack used Stabat Mater, a 13th-century Catholic hymn to Mary, written to convey her suffering during her son’s crucifixion. It has been interpreted over the centuries by dozens of composers and musicians. That kind of spiritual continuity made me think about the connections Michele is making, between distant past, troubled present and a future in which he insists on optimism. I’m not sure I agree with him, but I’m quite happy to join him on his journey because, in his Gucci, there is hope.