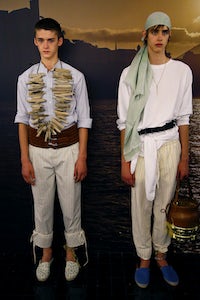 PAIRS, France — On a morning when cold, hard political reality temporarily (one can only trust) laid a clammy hand over any hope for a better future, ardent anti-Brexiter Jonathan Anderson coincidentally showed a collection for Loewe that was jam-packed with all the youthful idealism that the UK’s popular vote had denied. Loewe was always dogged by the weightiness of “sophisticated” Spain but, after he took the reins, Anderson quickly turned his attention to a looser, more sensual interpretation. Ibiza!

He returned there today with a story loosely based around two brothers heading back to the island on a treasure hunt. There was gold in them thar hills: a barrel bag dipped in the stuff, denims splashed with gold, a linen top scattered with coins from a treasure chest. It was a fantastic, hippie deluxe idea that set the tone not just for the collection, but for a presentation, designed by longtime Anderson collaborators M/M Paris, that incorporated Ibiza-ish details — woven cane tables, nautical ropes — into the showroom space. (The air was thick with the smell of sisal.)

Anderson has mastered a very particular sophisticated naïveté for Loewe’s menswear. The huge tunic tops, oversize shirts and terrycloth shorts took the same glee in the childlike that his own collection did. There were soft animal bag charms, like toys. And there was a rawness that matched the island inspiration. A waffle-knit cardigan dissolved into fringes; the Japanese patchwork technique called boro was used for a jacket garment-dyed a deep purple; pockets were tied, not sewn, on.

At the same time, there was the peculiar worldiness that Anderson is able to inject into all his collections. Most of it involved leather, which is Loewe’s signature. But he added his own touches. Green leather sailor pants had huge cotton turn-ups, a cropped fuchsia jacket had unnaturally elongated sleeves. The broken-down heels on croc loafers turned them into luxury scuffs. Spanish photographer Ouka Leele provided the lurid 1980s graphics for accessories. She was part of the Almodovar cultural renaissance, a cult figure tailor-made for Anderson’s own curatorial instincts.

It’s easy to see how Loewe is giving them full rein. He insisted he hasn't been pressured to create such a broad accessories offering, he just does it because he loves it. And one more gold-dipped bucket bag said that love shows. 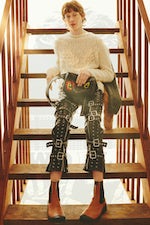 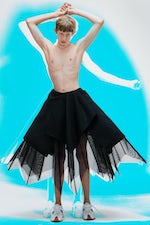 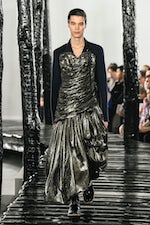 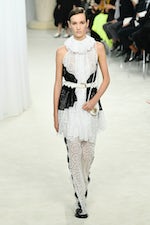