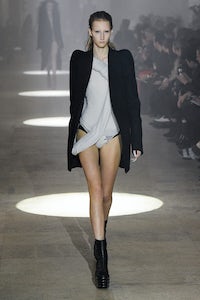 PARIS, France — Diamond Dogs. Icons of mutant glamour, courtesy of David Bowie’s 1974 concept album. Californian kids like Rick Owens swallowed it whole, took it as a lifestyle manifesto. Latent it lay, till Owens reanimated it for his new show. Online, he found an 18-year-old Welsh girl named Salvia, whose makeup design gave his mutants good face. He brought the glamour.

It’s not like Rick Owens is going soft. He described the glamour as “grim and determined.” A reaction to what he calls “the sullen entitlement of now” vs. “the thrill of potential liberation of the 70’s.” He wanted his collection to be full-on glam: the platform boot, the sharp sci-fi shoulder, the sexual provocation. His spirit guide was Larry LeGaspi, designer for Labelle and KISS, iconoclastic shaper of a million teenage dreams, and subject of a gigantic fanboy project that Owens is publishing with Rizzoli Books in October.

LeGaspi certainly hovered over the show’s crotch-focused opening passage, though Owens tempered LeGaspi’s “sweaty elegance” (phew!) with the most immaculately tailored jackets and coats he’s ever offered. He’s lately taken to calling himself “a complete hedonist who believes in responsibility,” and these looks — wanton vs. wound up – defined that perfectly.

In the full farrago of an Owens show, it’s easy to forget that old Hollywood is his beacon. He claimed that Cecil B. DeMille’s titillating swandives into sin followed by last-reel redemption are his aesthetic to a tee. The moral of the story wasn’t particularly evident in Thursday’s outing, because it was so clearly evident that Owens was more taken by the sensuality of the Fortuny-printed swatches of fabric that draped bodies, or the chill, alien beauty of silver fur cowhide jackets. “I do think about poetry when I’m composing things,” he said. “They are compositions, like poetry.” That’s why his clothes are always grand, though it doesn’t explain their animal magic. The diamond dogs are poachers and they hide behind the trees.