A heady mix of macho-femme and delicate romanticism dominated the runways, but Craig Green transcended it all, reports Angelo Flaccavento.
By
19 January 2020

PARIS, France — It might take a while to filter past the borders of the fashion realm and into the mainstream, but it's finally clear that the gender connotations traditionally applied to clothing are becoming completely irrelevant. Clothes are sexless until worn. Of course, gender fluidity has been gaining steam for quite a while. And now, we are back at macho, or something like that.

Rick Owens, in what allegedly was one of the stand-out shows of the season, went with a full-blown homage to Bowie and the gender-bending theatricality of the stage wardrobe Kansai Yamamoto conceived for him — Ziggy Stardust and Aladdin Sane era — complete with extended shoulder line and asymmetric bodysuits. It was a little too literal probably — we are used to more elaboration from this most brutally inventive creator — but it was literal in a good way, filtered through Owens' mastery with cut, texture and colour. It was also personal, very personal, and very visceral for that: Owens came out for the final bow already decked in the humongous shoulders, deep plunging necklines and towering platforms sent minutes before down the smoke-filled runway. The macho-femme, you know, is oh so vain. 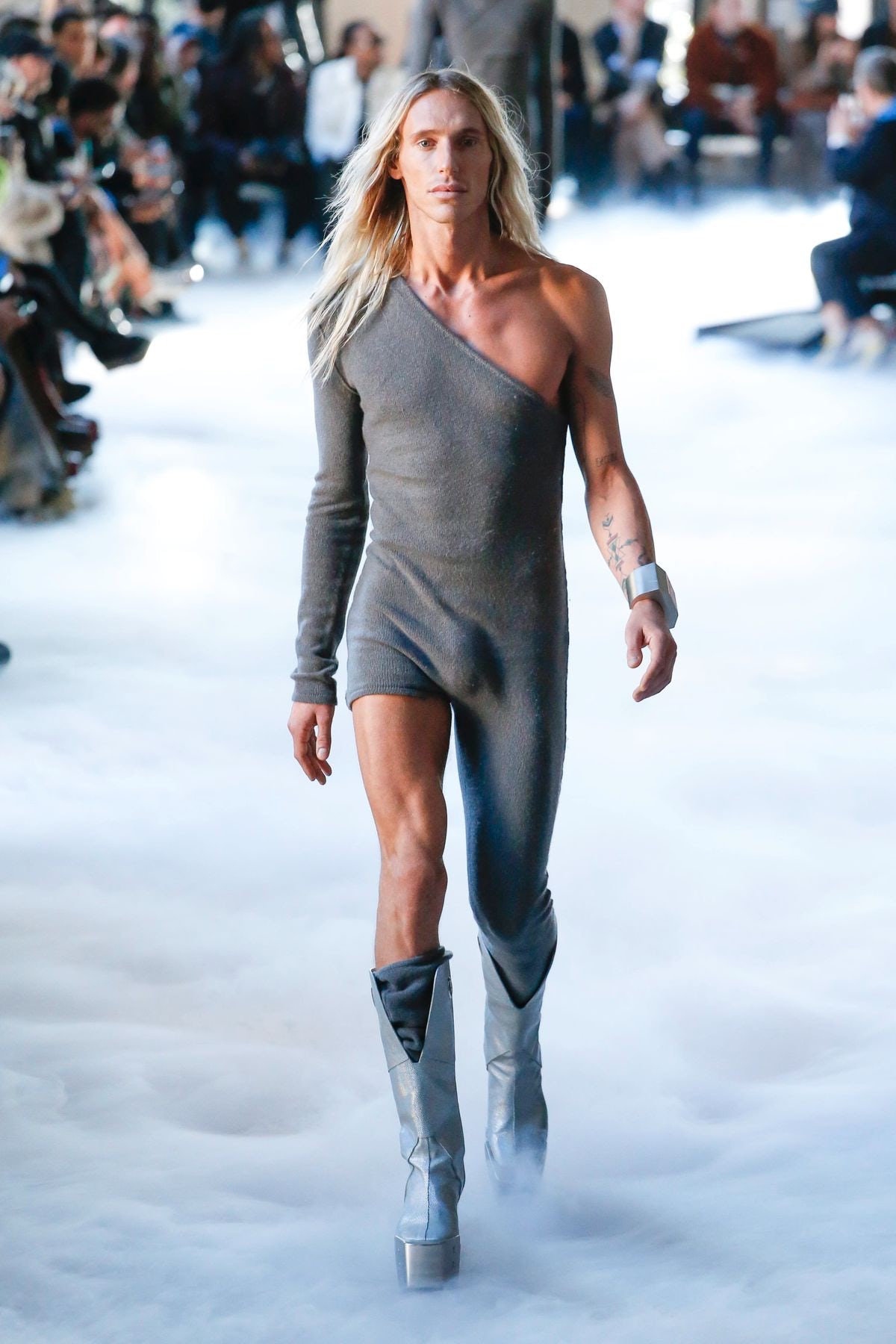 Dries Van Noten, forever a herald of soft, painterly masculinity, opted for a healthy dose of glitzy testosterone too. He did it his own way, as a gentleman, looking at genderbending trailblazers such as artist Urs Lüthi and photographer Karlheinz Weinberger to rid himself of rules and dive headfirst in a mix of fur, platforms, animalier, velvet and skin that in his own words was "visceral, louche, feral, fly." It made for a captivating, if highly unexpected outing — quite aptly labelled Dries2 — that was a healthy reminder that, if it's not about status, dressing up is best when it's about that other powerful s-word: sex.

At Paco Rabanne, Julien Dossena was on an equally decadent 70s wavelength — think Ossie Clark, Granny Takes a Trip, clear plastic capes, metal mesh, printed tailoring and everything very, very skinny. Defying gender barriers requires an unforgivably thin body. Or does it? The fauns over at Ann Demeulemeester were skinny, too, and the louche tailoring they wore was razor-sharp, but erotic instead of gloomy, making for an interesting evolution of Demeulemeester's code in the hands of creative director Sebastien Meunier. Sure, the Nijinsky inspiration was carried a little too literally. Then again, being literal is a widespread maladie, these days: there is probably too little time to ruminate on inspirations and make them fresh.

Since he started his path at Dior, Kim Jones has always liberally plundered Monsieur Dior's archive, oblivious of gender divides. Up to a point: provocation is not part of the brand's mainstream mindset. It's all about giving things just a bit of nuance, a tiny zing of surprise to make them desirable for the audience, not much rumination needed. It's all about the merchandising, you know. This season, it was opera gloves and taffeta capes and full-blown couture grandeur and a lot of jewellery, looking sideways at the wonderful provocateur who was Judy Blame. It made for Jones' most accomplished outing for the house — it had a warmth that was lacking in previous efforts — but one that also made you think about the legitimacy of such operations on moral terms. Turning Blame's love for jumbled junk into some heavily polished Dior-branded feels a bit like a betrayal of Blame's punk spirit.

The ongoing feminisation of menswear also took more delicate routes, in an outburst of romanticism. Pierpaolo Piccioli, at Valentino, splashed gigantic flowers and love words on monastic coats and roomy suits swinging beautifully around the body. Raf Simons brought his solar youth on a space mission, drawing a vertical silhouette that was as sartorial as it was sci-fi, and touchingly elegant for that. The echoes of Margiela — both Martin and John Galliano — were palpable, and probably intentional, but the collection struck a chord for sheer beauty and a sense of distance and detachment. Muffs were the it-accessory here as well as at The Soloist. Takahiro Miyashita's label keeps flourishing in its own fashion-forward niche. This season, it was all about fragility, broken up masculinity, clown make-up and bare legs, and it was wonderful, slashing and enchanting in equal measure. At Lanvin, Bruno Sialelli finally stepped out of the shadow of his former employer, Loewe, and came into his own with a Corto Maltese-inspired detour across elongated silhouettes and slouchy shapes that oozed a potent mix of romanticism and infantilism.

Of course, it wasn't all about the femme. Rebellion and convention battled all across Paris. If eternal anarchist Rei Kawakubo proposed a brilliantly multi-culti, colourful-to-the-point-of-garish resistance to the grim times, and Glenn Martens heralded the liberating joys of sheer chaos at Y/Project, elsewhere the resurgence of tailoring and classicism that started in Milan was in full swing. The surreal tailoring at Louis Vuitton was technically captivating and certainly progressive, but it looked a little dull — and, for the clouded suiting, a little too Franco Moschino. Virgil Abloh clearly feels the need to progress, but still has to find the key. The tailoring was sharp at Givenchy, and soft at Rochas, where Federico Curradi's first outing on the catwalk was nocturnal and poetic, but it was at Dunhill that it felt modern and relevant. 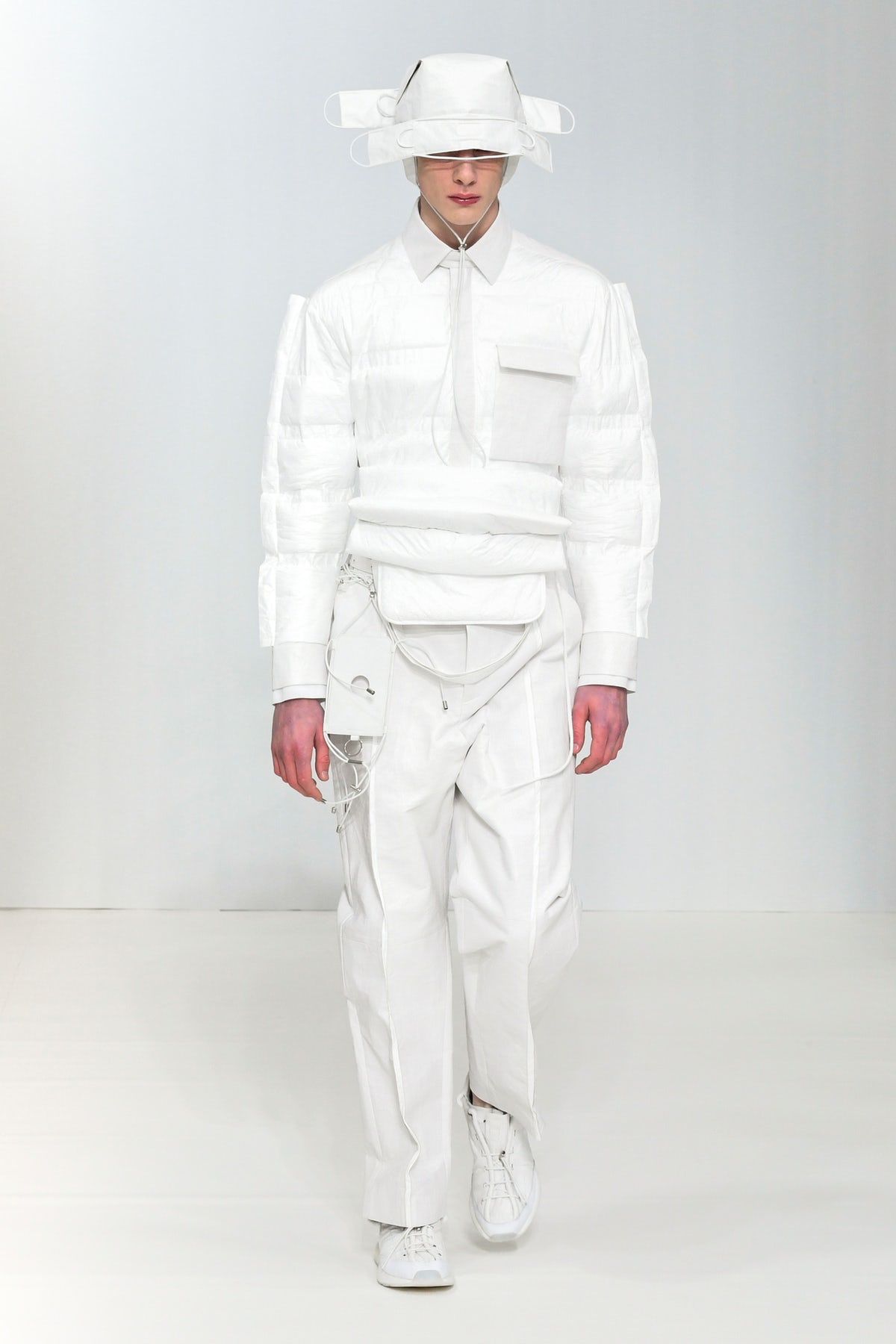 Then, there was Craig Green. What if we get over the plundering of the past, nostalgia, melancholia, sartorial whatever, rockstars and gender benders and embrace new species of clothing that are as far as possible from what we already know? That's what Green's journey has been all about. Sure, his latest show was repetitive with regards to his code, but it was also poignant, enthralling, hypnotic, primordial and visionary: a collection that left ample room for further interpretation and rumination. Green offered proposals, but not answers, and in doing so he truly looked forward, in terms of masculinity, as well as of shapes.

[ At Jacquemus and Hermès, Smoking Hot and Sharp Simplicity ]

Casey Cadwallader and Pieter Mulier prove that iconic design signatures can be rewritten for a new age.

The Roman Spring of Haute Couture

In Paris, the Outlandish and the Quotidian

Couture week delivered a dizzying mix of the surreal and clothes actually meant to be worn by clients, writes Angelo Flaccavento.

After years on the fringes of the industry, the Hong Kong-born designer opens up about his first-ever show, set to close Paris couture week on Thursday: ‘Fear is the inspiration.’