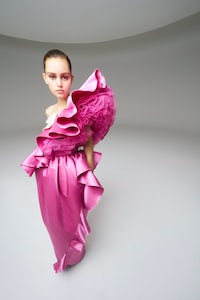 PARIS, France — Giambattista Valli opted once again for an exhibition format in lieu of a show this season. He took over a real exhibition space, The Jeu de Paume and, contrary to the inherent elitism of haute couture, decided to open the exhibition to the general public, too, in order to allow anyone interested in savouring the exquisite preciousness of such beautifully made creations to do just that. The decision was good one, which brought a warm energy to the project. Valli himself was in a cheerful mood, and happy with the results. The dichotomy between his native Rome and his adopted Paris is ever-present for the designer. In fact, it’s practically the source of his entire creative vision, set in constant tension between grandeur and nonchalance, excess and restraint, liquid draping and sculptural constructions.

“I designed this collection in Roma,” he said, adding with a laugh: “Front doors are bigger there, and ceilings are higher.” Grand, that’s how it all looked. But joyous, too, thanks to a very bright, Mediterranean palette of yellows, reds, pinks and greens. The colours of a garden, in fact. Across the rooms, a summary of Valli’s thinking unfolded in a series of tableaux displaying the familiar face-off between sculptural silhouettes and more liquid lines, with a wink or two to Roberto Capucci and a palpable air of 1960s extravaganza. It worked very well, with the museum setting highlighting both the timelessness of Valli’s creations and their debt to a classic past.