It Was Alber Elbaz’s Night…

…and the fashion industry said goodbye with a 45-designer salute and a major tycoon turnout, writes Tim Blanks.

It Was Alber Elbaz’s Night…

…and the fashion industry said goodbye with a 45-designer salute and a major tycoon turnout, writes Tim Blanks.

Paris, France — PARIS — Whenever I hear the O’Jays’ “Soul Train,” I think of Alber Elbaz. It always seemed to be playing when we were on a dancefloor. And there it was again on Tuesday night, at the end of the massive tribute paid to him by the fashion industry following his death from Covid in April. “People all over the world, join hands, start a love train, love train.” In the audience were all the great fashion families: LVMH, Kering, Richemont, Inditex, Puig, as well as the First Lady of France, Brigitte Macron. It occurred to me, fancifully, that Elbaz was the Don, the only individual with the power to unite so many rivals under one roof. They weren’t exactly starting a love train, but some of them were deffo getting their groove on.

There was so much about the night that was quintessential Alber. The trays of candy-iced eclairs were testament to his sweet tooth. The sharply tiered and tightly packed seating echoed his shows (a bit nerve-wracking for the covidphobic). So did the swirling spotlights. I occasionally wondered if Elbaz would have loved to be a rock star. Music meant so much to him, and he knew how to wrap it up in a ball with glam fabulosity. 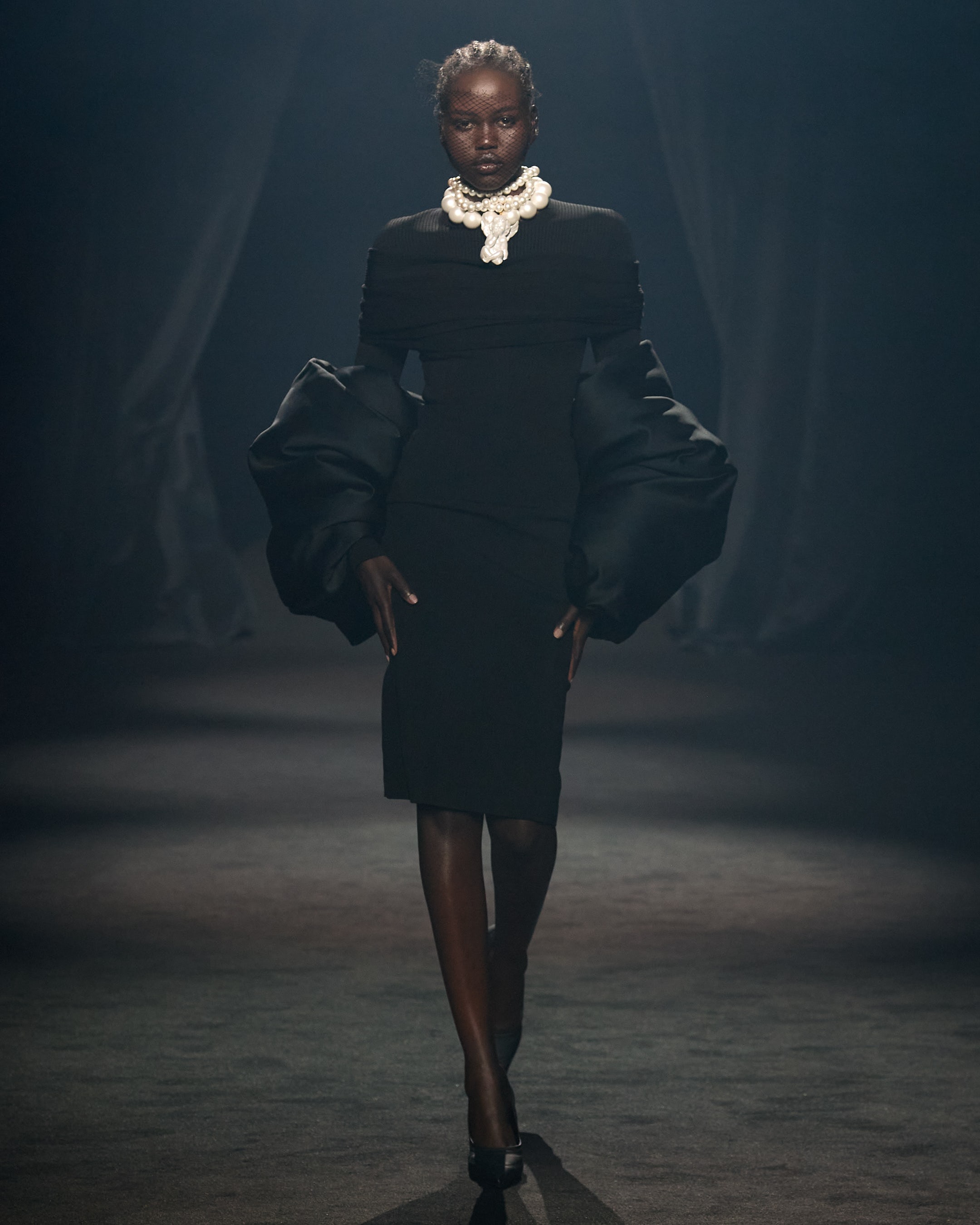 Adut Akech walks the runway in a look by AZ Factory during the Alber Elbaz tribute show as part of Paris Fashion Week. Courtesy.

On the pre-show soundtrack, Elbaz’s partner Alex Koo spoke about his fascination with the Théâtre de la Mode. In 1945, Parisian couturiers dressed dolls in scaled-down looks which very successfully toured the world to let everyone know French fashion was alive and kicking after the privations of World War II. Koo said it was Elbaz’s dream to bring about some similar promotional group initiative. Ironic that it took his death to realise a semblance of that dream. Forty-five designers each contributed a look in tribute, from the oldest guard Giorgio Armani and Ralph Lauren to the youngest Thebe Magugu and Daniel Roseberry.

Some of them were direct. Adut Akech opened in a dress from AZ Factory, Elbaz’s most recent project. Dries Van Noten offered Edie Campbell in a photographic jacquard of an Elbaz sketch, paired with a headpiece by Stephen Jones, that featured a signature Alber bow with a satin ribbon wig and glasses. Olivier Rousteing also wove an Elbaz self-portrait into his look. Dior’s Maria Grazia Chiuri and Lanvin’s new designer Bruno Sialelli both used a long train to show Elbaz some love. 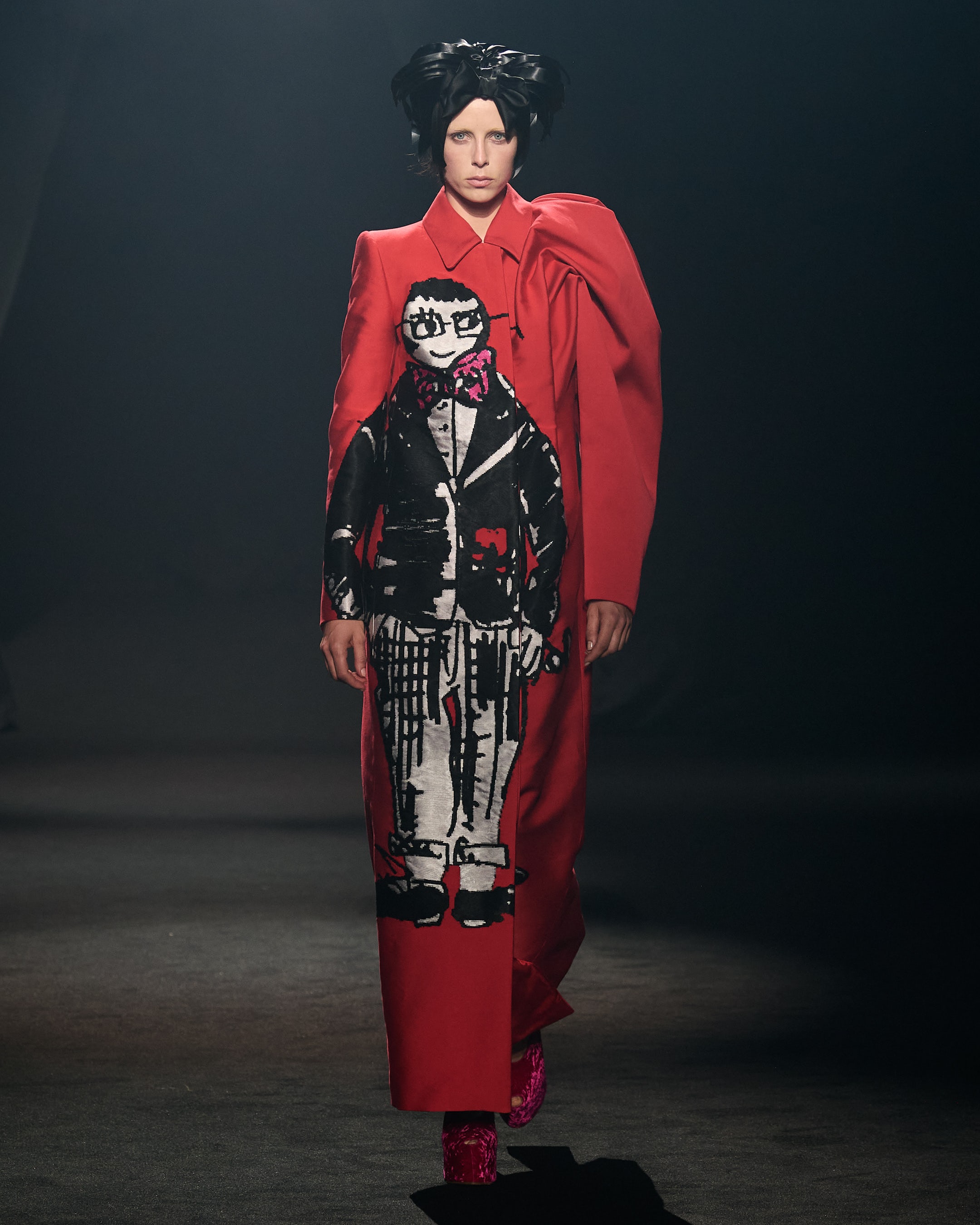 Edie Campbell walks the runway in a look by Dries van Noten during the Alber Elbaz tribute show as part of Paris Fashion Week. Courtesy.

Other designers chose a more abstract salute. Elbaz was a wizard at creating maximum volumes with minimum seams. And pink was a favourite colour. So Demna Gvasalia took that route with a huge pink couture bubble. And Rick Owens made an acreage of sinuous, flowing, hooded pink in washed silk gazar, one of Elbaz’s favoured fabrics. Then there were the ruffles that always turned the catwalk into a party while Elbaz was at Lanvin. They were right up Pierpaolo Piccioli’s alley. He paraded Mariacarla Boscono in one of his space-devouring extravaganzas. In pink, of course.

In the book that accompanied the evening, Piccioli made an interesting point about Elbaz. “He was committed heart and soul to his job, fashion was a mission to him, and I don’t know if our system has rewarded him sufficiently… maybe not.” There were several times in his career when Elbaz was cast into the wilderness, not least the five years after he was let go from Lanvin, the job that defined him. While it was lovely to see the outpouring of emotion for him on Tuesday night, there was a niggling thought. Where were you all way back when? But maybe that’s just me being Cavilling Cathy. 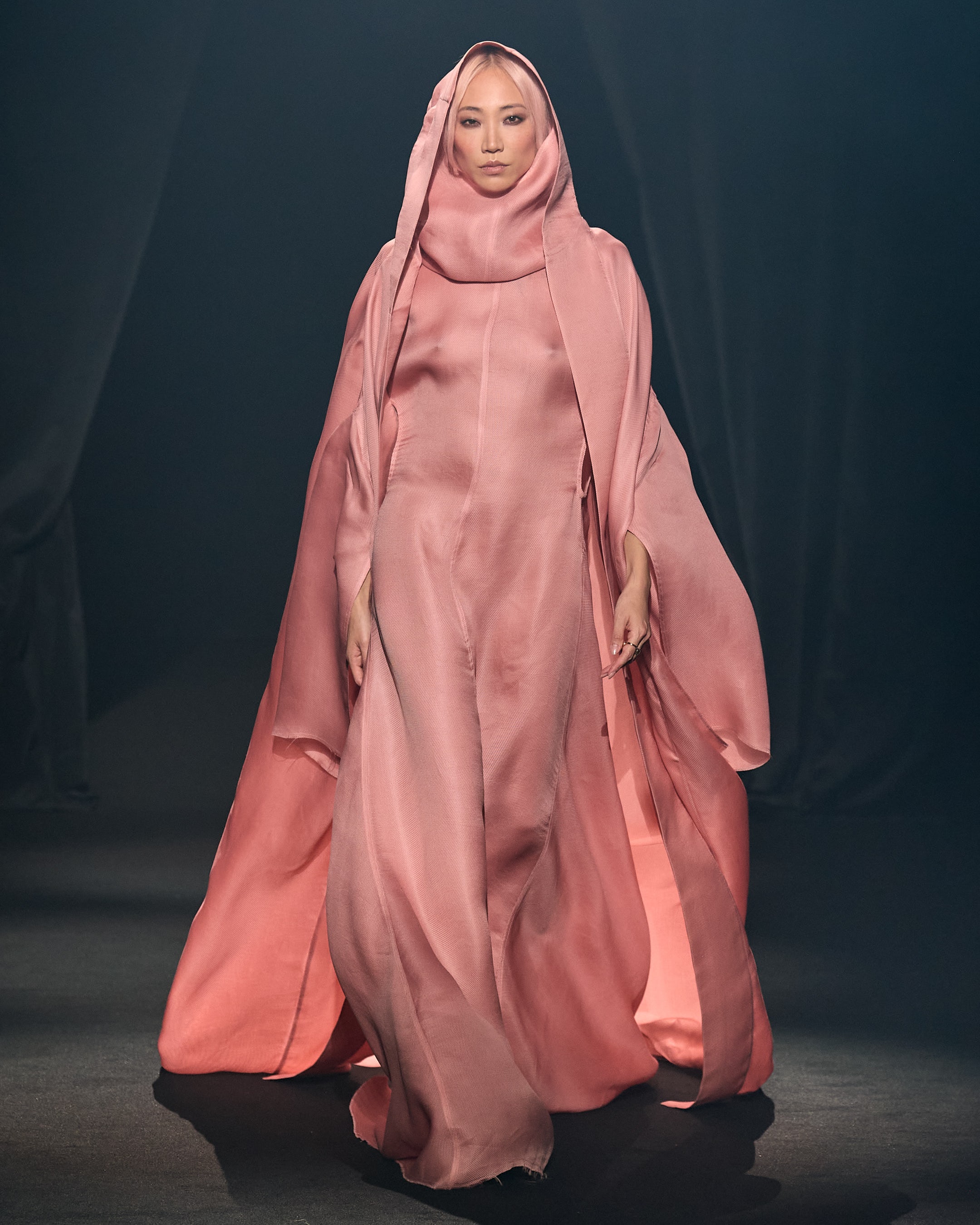 A model walks the runway in a look by Rick Owens during the Alber Elbaz tribute show as part of Paris Fashion Week. Courtesy.

After all, the evening ended with a presentation of clothes by AZ Factory and they were so quintessentially Elbaz that they struck a positive chord. Koo was weeping but exultant. “Alber would have loved it,” he said through the tears. That was the simple truth. I also found something else in the souvenir book. Elbaz was quoting a friend of his beloved mother’s, whom she’d asked to explain accounting to her. “It’s easy. You get and you give. You give and you get.” I really wish Alber had got more because he certainly gave enough.

The BoF Podcast: Alber Elbaz: ‘We Remain an Industry That Creates Dreams’