This Morocco-inspired outing proved how far the designer has come in creating a signature for himself: maximum effect with an economy of means. 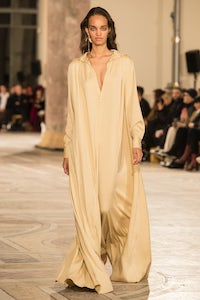 This Morocco-inspired outing proved how far the designer has come in creating a signature for himself: maximum effect with an economy of means.

PARIS, France — Simon Porte Jacquemus dedicated his last collection, his breakthrough, to the sensual style of his late mother Valerie. This season, he clearly felt it was time to move on. His hoodie read "New Job: L’Homme Jacquemus." He explained that he’d promised himself he’d only do menswear when he found the right man to inspire him. It was plain to see that love had come to town.

But Valerie wasn’t going to go so easily. She was obsessed with Marrakesh, and Jacquemus’s new collection was all about his own experience of the souk. He said it’s where he goes to unwind at the end of a season. On his last visit, he decided to make the souk the premise of his next summer collection. But this winter in Paris has been a particularly grey, miserable one — heavy snow is promised later this week – and Jacquemus had a revelation. Why wait? Hence, his “warm winter," his message of sun. “People need the smile.”

Warm? Make that hot! He wove the same curvy, leggy threads through this collection as his last one. Maximum effect with economy of means: that’s the Jacquemus formula. It meant a second-skin knit tube with a scoop neck and a slit high on the thigh, or a pencil skirt, also knit, with a rolled waistband accentuating the hips, or a latticed top over a high-waisted wrap skirt, cut way high at the front. The North African influence could be directly felt in the modified djellaba silhouettes, like the fabulous jumbo-legged jumpsuit that opened the show, but it was more a subtle insinuation in the wholesale drape-y, fluid sensuality of the collection. Valerie again. “I did Jacquemus womenswear for her,” he reminded us. Now he’s overwhelmed by new love, it looks like it’ll be menswear that’s momentarily higher on the agenda. But this outing definitively nailed how far he's come in creating a signature for himself.