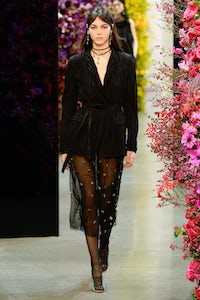 NEW YORK, United States — Fashion Week — with a capital FW — has become a choice, and Jason Wu is choosing yes. He says he’s fully committed, and to New York in particular. “Many people are down about New York, but I’m doing three shows here,” he said in the hours leading up to his Autumn/Winter runway show, which followed the debut of his latest collection for sister line Grey and preceded his Boss Women’s collection presentation the week after. “I love that everything is different now. I really want to be part of making [NYFW] exciting.”

But any thrilling, next-level collection must possess a light-bulb moment. In his last few efforts, Wu has struggled to generate the necessary heat on the runway, even when the collections fall into place commercially.

For Autumn, Wu took his typically “polished, buttoned-up” approach and hewed the edges a bit on high-neck sheer blouses and crinkled silk blazers. Airy skirts and knits were appliqued with paillettes and tops were tiny-pleated in traditional Wu-vian fashion. A languid satin suit in grass-blade green fetchingly dripped off the body, with plenty of florals and tulle on offer for the loyal clientele.

All that to say: It was pretty, but it read a little one note. And one couldn’t help but think of Sies Marjan’s Spring/Summer 2018 collection when the heavier, twisted satin tops and flyaway straps appeared. Things seep into the ether, sure, but in order for Wu to play a significant role in making New York an exciting place to show, he’ll need to sharpen his focus. He’s certainly capable.