Trevi revved Fendi: collaborators Silvia Venturini Fendi and Karl Lagerfeld were both feeling a zesty new take on the house. 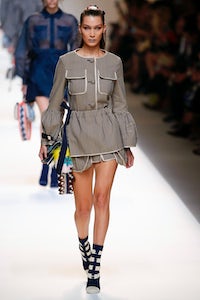 Trevi revved Fendi: collaborators Silvia Venturini Fendi and Karl Lagerfeld were both feeling a zesty new take on the house.

MILAN, Italy — In July’s spine-chilling Fendi couture show, models walked on water at the Trevi Fountain in Rome. Not quite — there was a Perspex catwalk — but the illusion was convincing. And the audience believed miracles could happen. Sort of.

Getting all mundane for a moment, it was obviously much more challenging to duplicate that reaction in the context of an “ordinary” runway show. But Trevi revved Fendi: collaborators Silvia Venturini Fendi and Karl Lagerfeld were both feeling a zesty new take on the house. The collection they showed on Thursday was lighter, fresher, more open, more summery than Fendi usually is for this season.

The key look was as unambiguous as a floaty apron open at the back over a neat little pair of Fendi knickers. In a way, the apron was Lagerfeld’s carry-over from July. He saw it as a cascade, like that breathtaking moment when the glacial sheet of the Trevi’s waters tipped over the bowl of the fountain into the pool beneath.

“I like clothes when they move and float about,” he said. As Silvia saw it, the different points of view offered by the aproned front and knickered back were a perfect expression of Fendi’s peekaboo sensibility.

She may have had cheekiness in mind, but equally there was the now-you-see-it-now-you-don’t aspect of a Fendi show: the incredibly complex workmanship that passed in a flash, the historical quote that evaporated into something from the future.

The Trevi Fountain show drew on the work of children’s book illustrator Kay Nielsen. It was clearly hard to let the fairy tale go. Lagerfeld once again dissected history, drawing on the delicacy of favourite ceramic artists and the embellishment of 18th century rococo, among other contact points.