Dressing in the Dark at Maison Margiela

Symbiotic bonds between Martin Margiela and John Galliano, forged in London clubdom, wove a web for the future. 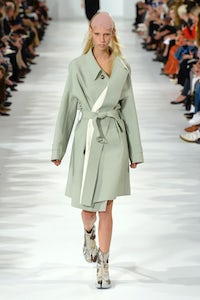 Dressing in the Dark at Maison Margiela

Symbiotic bonds between Martin Margiela and John Galliano, forged in London clubdom, wove a web for the future.

PARIS, France — It took Martin Margiela himself to remind John Galliano that they’d first connected in Taboo, in the distant, feverish past of London clubdom. And then, later, when John arrived as a virtual starving artist in Paris, it was Margiela who gave him space to create a collection.

Thus were symbiotic bonds formed that would ultimately weave a web for the future, the kind of future that was offered on the Margiela catwalk on Wednesday morning, when the original ethos of the company was subjected once more to Galliano’s empathetic interpretation.

Upside down, inside out… Margiela’s authenticity lay in such basic inversions of the status quo. It’s been one of Galliano’s challenges to integrate his own appetite for subversion into that equation. And he’s done it. In a preview the other day, he spoke of “the anonymity of the lining.” Margiela’s elevation of the banal, the overlooked, made garment linings a signature design detail. “Like Chanel’s camellias,” said Galliano, who took the idea further with the spectacular trenchcoats in his new collection, turned inside out to make strappy dresses that could be turned back into coats with a dexterous flourish. Two-for-one never looked so good.

Galliano also said the collection was dictated by “the unconscious glamour of dressing in the dark”, which had a fashion-y tang about it until you actually gave the notion some serious thought. Maybe it’s dark, maybe you’re in a hurry, but you throw things on and some curious internal logic asserts itself. Glamour? Perhaps not, but you’ve just exercised the instinctive human inclination to extract order from chaos. And that has been one of John Galliano’s enduring benchmarks over his three decades in fashion.

Of course, it’s been his kind of order, which probably looks like chaos to most people. Case in point: Maison Margiela Spring 2017. Somewhere deep inside were surfer boys in Topanga Bay: the minimalism of their dress,  the physicality of their lives. “They have to be in the present, otherwise they’re dead,” said Galliano,  a sentiment he absolutely identified with in the one-day-at-a-time process of his recovery.

So the iconic Tabi shoe became a scuba boot. A wetsuit folded down to form an elongated tubular silhouette. A yoga mat was hitched to the backpack of a terry-clad nymph, and a sweater wrapped a model like a life-vest. One recurring design detail was clusters of what looked like mussels trailing off necklines and hems (you could picture the same clusters on the rocks in a Californian bay). They were actually glossed, deflated balloons. “I’m not saying the party’s over, but there’s melancholia there,” Galliano offered by way of poignant explanation.

And yet, it was scarcely melancholia that the collection conveyed, with Galliano painting a playful picture of the future. The eyewear by Mykita and earwear had a fabulous sci-fi wit. At one point, Pat McGrath provided metal lips for the perfect 22nd century pout.