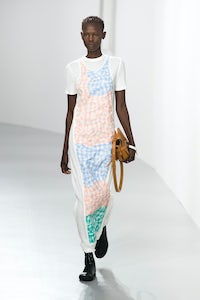 PARIS, France — “I can’t compete anymore, it’s non-stop,” said Jonathan Anderson on Friday morning after his latest show for Loewe. It was a curious admission, given that he’s always been ready for anything – and more – that the demands of his job threw his way. But his declaration made for a smart segue into Anderson’s current obsession with the dialed-down, with the “real”. It’s been pretty obvious in his last two collections under his own label. The sensual Balearic ease of his recent collections for Loewe also reflected his engagement with “reality”. And this new one ran once more with the Balearic ball, consolidating Anderson’s re-orientation of Loewe’s Spanish roots.

But there was an inevitable twist to Anderson’s up-fronty-ness. “I’m obsessed with the idea that the most normal things become most disturbing,” he said. He shares that sentiment with the likes of Alfred Hitchcock and Stephen King, but it’s not so much fear as a yen to dislocate that characterizes his approach. And it was all over the collection. A t-shirt with black tuxedo trousers? “That complicates simplicity,” he explained. So did a gingham tank dress crushed onto a floor-length t-shirt. Or the patchwork quilt and paisley shawl hybridized into sensuous sheaths. There was a floral-printed Edwardian interlude, with pith-helmet headgear, that suggested a woman retreating into gardening as a sane response to the speed of life.

There were also shredded, beaded pieces that were as Balearically hazed as anything Anderson has created. But he also shredded a classic trench, which made you realise that what thrills this designer is the possibilities inherent in fabric. “Cloth is what makes clothing,” he enthused. He filled his rooms at the Maison d’UNESCO with huge, immensely tactile tapestries that took months to weave. Some were of Steven Meisel’s new ad campaign, the one with the models with fruit in their mouths (a fine illustration of normal-turned-disturbing). More impressive was the 20-foot rendition of a little old photo of boys on a mudslide that Anderson found in a carboot sale. “A big gesture from a small image,” he said, masterly in his understatement.

That’s the essence of his craft. A transformation which is, at heart, a playful magic. Disturbance, complication approached as a game. There was a sweater here with Loewe playing cards woven into it. There were trainers with big curly toes, like Aladdin’s, and shoes with a stegosaurus spine. Proportions were elongated, distorted, dresses wrenched sideways into peekaboo keyholes. Anderson may be obsessed with normality but he prefers it through the looking glass. “You want to dream,” he said with a sly smile.