LONDON, United Kingdom — Two heavyweight foreigners descended on London Fashion Week this season. On Sunday, Giorgio Armani staged his Emporio Armani show and associated mega-party; then on Tuesday, Tommy Hilfiger touched down with one of his blockbuster runway extravaganzas. Along with the British megabrand Burberry, they lent the London calendar, usually filled with local darlings, bursting at the seams with creative (yet commercially neglectful) talent, an aura of grown-up professionalism.

But strip away the visitors and British fashion seems to be at a crossroad at the moment. On the one hand, there are plenty of ideas undiluted by the urge — shock! horror! — to actually sell. Of course, this is London’s forte. But to external eyes, the local scene, populated by hordes of new designers coming out of the city’s esteemed fashion schools and pumped ‘n pampered by the local press, feels quite tribal. On the other hand, the most mature of London’s young talents, those who have survived past the “darling of the season” stage, seem to understand that surviving in the overcrowded global fashion system requires a lot more than media exposure; it requires lots of real sales. 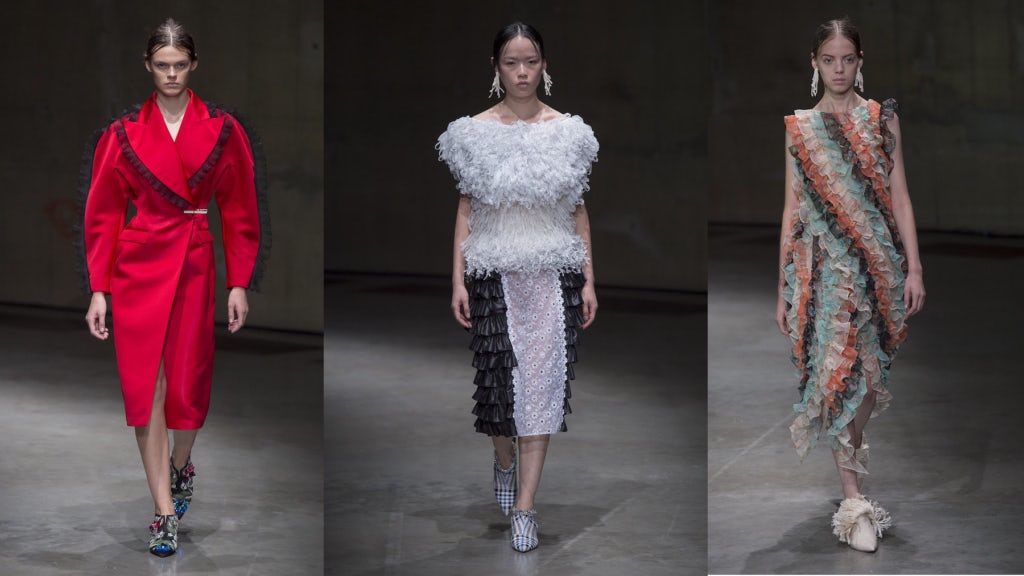 Of course, it's rich madames not young kids who account for the majority of sales and it's exactly this kind of woman — polished, elegant, bourgeois — whom designers, British and otherwise, aspire to dress right now. Is this the reason why the London catwalks were filled with conservative fashions that looked at odds with the city’s rebellious reputation? It might be. The span of this neo-conservatism was wide. It went from Erdem's dusty and romantic take on colonial and ladylike — so heavy on vintage, it felt like it was culled from grandma's attic — to Christopher Kane's terrific exploration of the kinky yet prim 'n proper pleasures of domestic life; from Mary Katrantzou's ode to the joys of childhood to Roksanda's polished take on bohemia and Michael Halpern's no-holds-barred celebration of sequined disco abandon.

The days of gritty neorealism are apparently over: it's time to celebrate glamour again. So much so that Burberry's detour on the grungy side of styling felt a bit contrived and derivative — an effort to catch l’air du temps that came, frankly, a season too late. For the moment, in fact, it's all about the sparkle and no one does it better than Michael Halpern, who deserves the title of darling of the season. In a curious inversion of sorts, Halpern comes across as a brand-new type of media darling. Rather than the proudly non-commercial hero, he is the designer whom Bergdorf Goodman's Linda Fargo keeps asking for more stock. 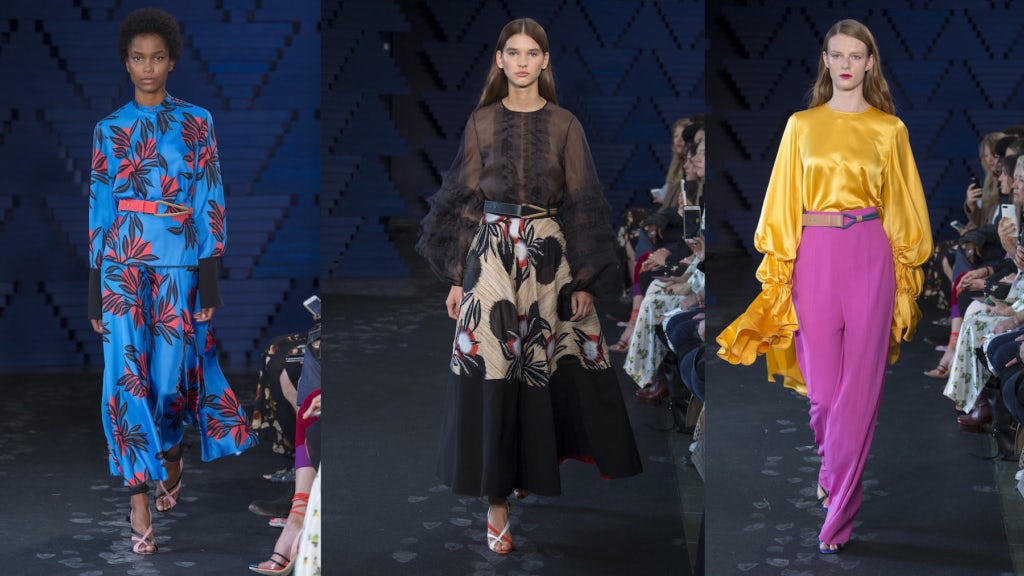 To be sure, Halpern comes equipped with great talent, yet the rabid attention and rave reviews he is generating do seem a bit exaggerated. He has fine-tuned a catchy, unapologetic recipe that works like the perfect antidote to the neo-90s somberness that's been looming large for a while — and he deserves kudos for that. But up to this moment, he has yet to prove his worth past his 70s-inflected party dressing. His visions are intoxicatingly womanly, that's for sure, but also heavily nostalgic of the pre-AIDS days of crazy, sexy partying. What's truly interesting about this designer is actually his stubborn focus on one single thing.

Such a mono-thematic approach is a telling sign of the state of contemporary creativity: gone are the days of designers changing their mind every six months and exploring a wide span of expressions while building a polymorphous identity. Today the speed of the system requires more unequivocal focus. Getting attention is not about developing a multifaceted personality. It's increasingly about singularity and shutting shop when the same idea is not working anymore.
Of course, not all contemporary designers follow this path. Christopher Kane is positively eclectic, for instance, his signature being more in his angular cuts and general sense of composed coldness than in one single item. Hitting the bourgeois nerve in his own perverted and amusing way, this season Kane produced a noteworthy collection that felt very London and very mature, even if some of his pieces may have looked more art-y than wearable. 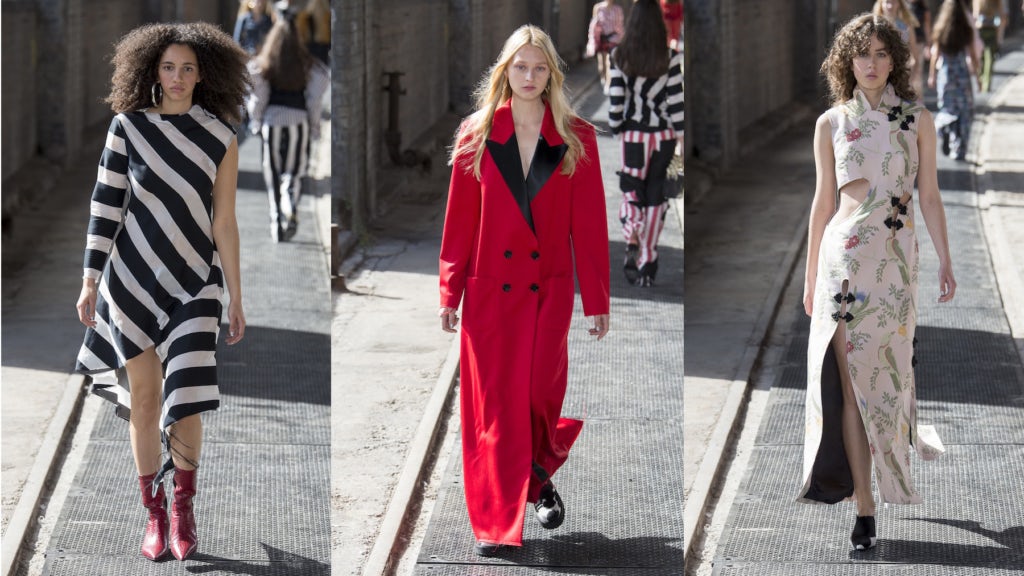 Amidst the kitsch of Julien MacDonald and the bourgeois precision of Anya Hindmarch, there were some who managed to be both creative and sellable — without selling out — and that's where London Fashion Week truly shone. This was the case is for J.W. Anderson, whose newfound focus on ease, function and normality translated into wearable pieces charged with a charmingly abstract aura. The was also the case for Simone Rocha, whose resilient brand of romanticism, at once tough and delicate, has made her a strong voice with a unique aesthetic. Here is a designer who has a vision and sells, but does not need to address ladies who lunch in order to do so.

Elsewhere, there was Marques’Almeida's gritty and sexy take on dressing — raw, unapologetic and rebellious — that kept the traditional flag of the London style flying. The duo is truly a force to be reckoned with: the way they progressed out of denim into a complete collection and from volume to something more structured is remarkable — and proof there’s still more to fashion than one-idea collections and that the London underground is still alive and kicking. Thank goodness.