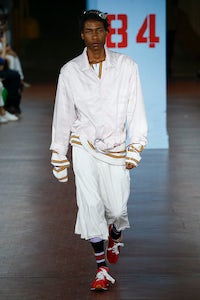 MILAN, Italy — Francesco Risso likes to challenge his audience with the seating arrangements for his Marni shows. On Saturday afternoon, the chosen few hundred perched uncertainly on Swiss exercise balls. All in keeping with Risso’s theme: L’Olympiade Imaginaria, a surreal sporting competition in which imperfection was allowed and everyone - plump, skinny, old, young – was welcome. “We’re used to the narcissistic pursuit of the perfect body,” Risso explained, “but it’s most important to bring tenderness. That’s more powerful than strength.”

We’re quite familiar by now with the way in which sportswear has transformed men’s fashion, injecting a casual physicality into rule-bound tradition. Risso doubled down, stepped back in time, exhumed vintage uniforms for cricket, tennis, baseball, golf, minced and twisted them and fired them back in new guises. Imagine ballers in big caps and plus fours, like the Duke of Windsor joined a street gang. Or players in boiled mohair two-pieces striped in lilac and pistachio. Team sports in Alice’s Wonderland.

The sportiness was indisputable, from terry robes that were ringside-ready, to swathes of racing stripes and checks, to the big, bifurcated puffas and the doubled t’s and sweats that will likely be the pieces that dress fashion editorials. But in the show setting – a rundown carpark underneath the Torre Velasca, one of Milan’s very first skyscrapers – it was more interesting to chase Risso’s rationale down the rabbit hole. “A ping-pong Olympics in Andy Warhol’s Factory,” he rhapsodised. “Innocence with a bit of corruption.”

There were photoprints of male body parts – homoerotic, I guess - by Berlin-based artist Florian Herz, followed by Matisse-naïve graphics borrowed from the painter Betsy Podlach, their contributions pointing to layers deeper and darker than the catwalk hijinks. Frédéric Sanchez’s soundtrack – John Foxx intoning “I Want to be a Machine” – compounded that impression. And don’t get me started on the invitation. Was it a gingerbread man made from bubblegum? It melted in the car.

Editor’s note: This article was revised on June 17, 2018. A previous version of this article misspelled Francesco Risso’s name.