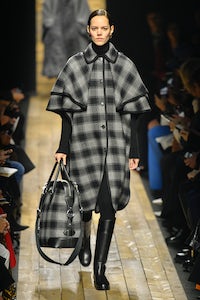 NEW YORK, United States — Nancy Pelosi has always worn Michael Kors. She told him his clothes make her feel strong, and God knows that’s something she needs in Washington. Before his show on Wednesday, Kors was talking about how it’s more important than ever to take a stand for your principles. “If you’re going to do battle, you’d better feel confident doing it,” he said. “That’s the simple truth. If you’re tugging at your dress, and you’re crippled in your shoes, and you can’t handle your bag…” Kors proudly pointed out there wasn’t a stiletto heel or a skintight dress in his new collection. “And we don’t have a bag in the show that’s not hands-free.” Instead, his woman was dressed for the "real" world. “We need a chic security blanket, that’s the reality.”

His business turns 40 next year, and he claimed he’s been thinking about clothing in terms of a security blanket more or less the whole time. Kors has always been ready with a raft of references for each new collection – usually a Hollywood style icon – but with this major anniversary approaching, he’s begun to reference his own work.

There sure is enough of it. Two decades ago, Naomi Campbell modelled a cape in a Kors show, Tina Barney later photographed writer Joan Didion wearing it. “We got a phone call saying Joan wanted to buy the cape and I couldn’t breathe,” the designer recalled. “Her writing, her sense of stylishness always knocked me out. Give me Mailbu Joan Didion and I’m there.” Kors owns Barney’s photo. “I wake up to it every day. That cape is graphic, it stands the test of time, Kaia Gerber is wearing it in the show today, 21 years later.”

Remember in “Citizen Kane” how the sled called Rosebud was a childhood memory representing all that was simple, good and true for the business titan Charles Foster Kane as he lay dying? Not wanting to sound morbid or anything, but I wondered if the cape might be Kors’s Rosebud, the thread that runs through his life’s work. He’s a mad movie buff, so the idea appealed to him. He certainly gave us a show that was the cinematic apotheosis of the cape, in every possible guise: Victorian detective, highwayman, Zorro, poncho, blanket. Coats and capes combined, collars flared into capelets.

The “simple, good and true” bit worked because what Kors was after was a sense of the cosiness and comfort of country dressing given a bit of spit and polish for city life. “Now more than ever, the simple truth is that our customers dream of being able to unplug and get out of town, but that’s not the way life works out.”

So Kors sold the fantasy – the joy of wide-open spaces – as efficiently as he’s always plugged his glamorous Hollywood-spiked re-visions of Americana. “The escapism, the honesty of the West is one of the things you can be proud of as an American, no matter what.” There was a pony print trench, and a full-on riding look in amidst all the caped cosiness.

Classics. Longevity. Kors has been brooding on them. “Funny thing is, we now have a whole new generation of customers who never thought about fashion as investment, but the sustainability conversation has woken them up. They say, ‘I don’t have to buy a dress to wear twice to post on Instagram, I can actually buy something that’s beautifully made and hang onto it. Intelligently, that’s what I’ve always thought but now we’re seeing a whole new generation approaching that idea for a different reason. That’s amazing.”

But, honestly, is it so amazing, when you’re presented with something as effortlessly, common-sensically glamorous as a slinky grey cashmere turtleneck elongated over a fishtail skirt pavé-ed with subtly gleaming graphite sequins and anchored by lug-soled boots? At what stage in the devolution of humankind is that not going to look good?