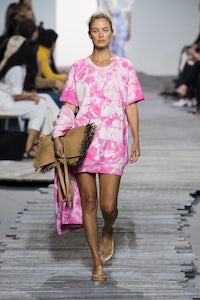 NEW YORK, United States — "The last bastion of optimism." Michael Kors meant fashion, but the unflaggingly cheerful designer could equally have been talking about himself and his own cockeyed faith in the power of clothes to make things better, his new collection being a case in point. “We went on holiday in Tahiti, and we were thinking, 'How can we bring a little bit of Bora Bora back to this crazy world?'" So out came the sun-bleached tie dyes, the palm frond prints, the sarongs and shorts and floaty tropical linens. But it wasn’t just the holiday that had put Kors in the mood. "It's the minute the weather gets warm," he went on. "I never thought I'd see flip flops in London, but we do. So how do you maintain that laid back attitude in big city life?"

Well, with flip flops, for one thing. And sandals, straw bags, bucket hats, and clothes that were as casual as anything Kors has ever shown, though the layback was infused with his own healthy appetite for luxe. The flip flops were croc, the tie dyes were cashmere, a pair of silk pants ombré-ed in shades of blue was paved in sequins. Still, expensive as they undoubtedly will be, they hardly ticked the big city box. Like much of the collection, they were less suited for steamy sidewalk than the weather-beaten boardwalk the models strolled (assuming that boardwalk would be connecting cabanas in some sensational South Sea resort). They were clothes for a great escape from the "crazy world."