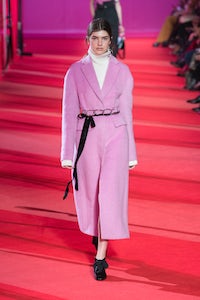 NEW YORK, United States — It’s no surprise that Phillip Lim referenced James Turrell backstage for Autumn/Winter 2017; Phillip’s a learned man, and his artistic inspirations rarely overpower his knack for pretty, wearable creations. Rather, the artist’s palette found its way into the show set via hot pink Perspex screens and throughout the collection itself, which ran through heathery, glacé colours like the rose pink of a nubby wool overcoat or a seafoam green Turrell-esque spotlight on a chunky rollneck sweater.

“The original New Romantics are a personal reference for me, but now it’s more about this curiosity of studying what a woman is through curve, line, colour, and cut,” he said backstage, perhaps referring to the proportional exercises of displaced tiers and wrap belted dresses in cloqué silk or ribbed knit.

Those worked best in their simpler iterations: elsewhere, sheaths of honeycomb mesh and ruched leather bustiers were a styling mishap that he could have done without. His best looks kept it simple: he played well off that New Romantic whimsy via tech fabrics, roomy tailoring, and slashed up party dresses in electric blue lace.