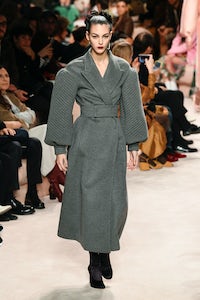 MILAN, Italy — Among the many pies Karl Lagerfeld inserted his fingers into during his protean career, costuming movies was probably one of the least sampled. Even ardent movie buff Silvia Venturini Fendi had no idea he’d dressed French star Bulle Ogier for her 1975 starrer “Maîtresse”. Maybe not so surprising given that the movie, with its story of a woman living a double life – dutifully bourgeois upstairs, hardcore dominatrix in the basement – caused such a scandal that it was initially banned in the UK. Before she starts work on a new collection, Silvia likes to screen a movie for her studio (95 per cent women) to establish the mood of the season. When she showed them “Maîtresse”, there were walk-outs. Decades after its original release, it clearly hasn’t lost its power to shock. Its perverse influence was tailormade for Silvia.

Just as her inspiration “Maîtresse” balanced pleasure and pain, Silvia wove a tapestry of contrasts: biker black leather vs. peignoir pink satin, austerity vs. abandon. She has been able to inject her own personality into the family business in a way that is subtle but striking. Once, Fendi was another way to spell FUR. Now, the focus of the collection is shifting. Yes, fur was still there, an artful accent, but the essence was a spectacular silhouette, and the materials that could sustain it. Black leather in a second skin jumpsuit. Charcoal cashmere, limning Karen Elson’s body like a laser, helped by some judicious boning through the bodice. If Elson was the ultimate sweater girl, the black-lace-filled scoop neckline on Maria Carla Boscono’s black velvet sheath was an immaculate recoup of a YSL outfit from way back. Maybe you know the look. Jeanloup Sieff turned it into one of the most iconic fashion images of all time. Silvia’s was even Juliet-sleeved, just like the original.

The peculiar precision of the Juliet sleeve, matched to the nipped waist, set the initial tone of the show. Dressy. After establishing that pulled-together mood in the first part of the presentation, Silvia was free to subvert it in the second. “The ABC of femininity,” she called it. “Powder pink, lace, suspenders, stockings, sheers, lingerie, boudoir, garters…the most banal codes.” Emblems of male-fantasy-fulfilling subservience, in other words, reclaimed here as fierce self-realisation.

The show notes pictured an unlikely scenario: take the boudoir into the boardroom. Who could even be bothered? “But imagine one day the president of a big country dressed in pink satin,” Silvia mused. Maybe J.Edgar Hoover, the notoriously cross-dressing head of the FBI, nursed a similar fantasy in the privacy of his own boudoir. But that was a mere bagatelle compared to Fendi’s grander vision. “I don’t like politics,” said Silvia, “but patriarchal power has failed, now it’s time to change. I would like to merge the word ‘feminist’ with ‘femininity’.” Please add “forceful” to that.

Miuccia Prada showed a few hours before Fendi. These two female figureheads of the Italian fashion industry are tellingly close in their ideas on how to move forward in fashion. So it made perfect sense that they should offer the strongest collections of the week.