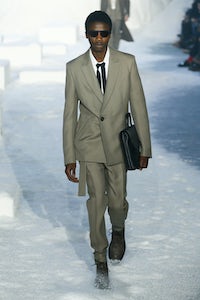 MILAN, Italy — Couture tailoring and a snowstorm do not usually match, but that's exactly what Alessandro Sartori devised tonight for the Ermenegildo Zegna Couture show that officially opened Milan Fashion Week — or weekend, that is. Guests were greeted in the modernist-brutalist premises of Università Luigi Bocconi, which were invaded by snow just like the eerie images of Thomas Flechtner, which served as an inspiration. (The artist was also involved in the design of the show experience.)

This all served as a backdrop — at times, a slightly annoying one — for another tour around the idea of elegant informality, which has been Sartori's byword since his installment as artistic director last year. The recipe sounds simple in theory, but requires quite a lot of sartorial work to function. Basically, Sartori merges tailoring and sport, keeping in place both couture craftsmanship and performing practicality. This season, for instance, the snow theme translated into massive jumpers intended as outerwear, pants with adjustable hems and some seriously sturdy boots. The coats had both a slender line and a militaristic swag. The injections of color were noteworthy too, as every hue was obtained with natural dyes, according to the sustainable principles of the Oasi Zegna. This all made for a visually impactful, impeccably tailored and gorgeously tactile collection that felt very sharp and very pictorial. The precision of the whole effort, however, was also its point of weakness. A little dash of chaos would have added life. Like snow invading a pristine building, you know.