He made a very clear statement about the Raf-ness of Simons, distilling all the elements — the fashion influences, the private passions — that have shaped and driven him for the near-quarter century he’s been in fashion. 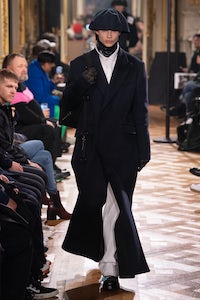 He made a very clear statement about the Raf-ness of Simons, distilling all the elements — the fashion influences, the private passions — that have shaped and driven him for the near-quarter century he’s been in fashion.

PARIS, France —“It’s been a year of extreme contrasts.” Raf Simons’ mild understatement set the tone for his show on Tuesday night. He called it “Diptych," which is literally a piece of art created in two parts. That was exactly how he presented his new collection, with an intermission to make the division obvious.

The schizophrenia of Simons’ life over the past 12 months hardly needs clarification at this point: America and Calvin Klein, Europe and his own label. They were ultimately — and publicly — impossible to reconcile. An intriguing stage was set for the designer’s next move. In the event, he made a very clear statement about the Raf-ness of Simons, distilling all the elements – the fashion influences, the private passions – that have shaped and driven him for the near-quarter century he’s been in fashion.

The invitation featured an image of a 16-year-old Laura Dern from "Blue Velvet," an enduring Raf reference point. Stills from the film were reproduced as graphic elements on the clothes. (And Dern herself was in the front row, scarily unchanged three decades later.)

“Atmosphere” by Joy Division, another longtime Simons pash, soundtracked the first half. Belgian band Whispering Sons played live for the second, with Kobe Lignen’s fabulous sheet metal guitar bringing Simons’ musical fandom right up to date (he said he hasn’t felt this way about a group since The XX). They also supplied the soundscape for the intermission, their challenge being to keep the audience in its seats when the show seemed to have ended after Part 1.

“I was scared they’d leave,” Simons admitted, at the same time as he told himself that there are a lot of entertainments that have an interval. In fact, here, it loaned the presentation an element of theatricality that suited both the clothes and the venue, a gilded public space in the ultra-luxe Shangri-La Hotel. As extreme contrasts go, it couldn’t have been more different from the gritty concrete bunker on the edge of town where Simons showed his spring collection, though it was perfectly suited to the extravagance of the clothes themselves.

In both halves of the show, Simons claimed the sweeping, cape-like volumes of the coats as a deliberate echo of Yves Saint Laurent couture. “How can we work on the architecture of the clothes?” was the question he posed at the beginning of the design process. The first half sought an answer in almost clerical sobriety, with a classic palette of black, white, navy and camel. The second half flipped into spectacular, saturated colour, another reminder of Raf’s love of Yves.

Less exalted but equally significant for him were the Halloween flourish of skeleton-printed pantyhose twisted round necks and waists. They were a mutated quote from Martin Margiela, Simons’ lodestone in most things fashion. The integration of such high/low elements struck him as a reflection of the way fashion is now, “everything coming together."

There was also a hint here of a sense of humour which doesn’t often get much play when people speak of Simons. The impressive trousers were printed at the knee with microscopic messages. One referred to “nomophobia," the irrational fear of being without one’s mobile phone. The other maybe mentioned, as far as my eyes could make out, “xanthophobia," the fear of the colour yellow. The rest of that message read “History of My World*to be titled*Twenty Nineteen.” The messages were almost Lynch-ian in their sort-of-making-sense-but-not-really.

But they also highlighted the ultimate contrast embodied by Simons’s show: that between past and future. Youth has long been his obsession. Here it was his own that he put under the microscope. All those hopes, all those dreams, the history of his world. Simons decked his collection with talismans, almost like good luck charms. His future starts here, its next chapter to be titled Twenty Nineteen. May it be charmed.