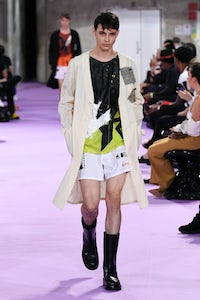 PARIS, France — Raf Simons has gone home in more ways than one. He’s living back in Antwerp, and his latest collection was a powerful reflection on highpoints, personal and professional. The key that unlocked it was the list of people, places and things printed on the back of his poster-size invitation, and on some items of clothing. It was a re-edit of a 2004 poem called “History of the World,” by longtime Simons collaborator Peter de Potter, which originally appeared on the similarly sized invitation for Raf’s Spring 2005 show. That was his tenth anniversary when the gears of his career shifted majorly for the designer.

Now, 15 years later, Simons wasn’t really talking after his show but he did confide that anyone looking for the kind of insights deadline-crazed scribes crave after a presentation as loaded as this one need look no further than “History of the World.” A cryptic challenge, if ever I heard one.

Simons did, however, offer a couple of clues: two names listed in “History of the World.” Jonas Salk discovered and developed one of the first polio vaccines. He refused to capitalise on his discovery by selling out to Big Pharma, believing everyone should have free access to it. Salk wasn’t on the revised list, but Giordano Bruno made it to both. He was a Dominican friar burned at the stake in Rome in 1600 for promoting a visionary scientific rather than religion-based vision of humankind’s place in the cosmos. Both men paid a penalty for their idealism. And here we were looking at clothes designed by a man whose own idealism has recently taken a very public licking.

That may have been the real point about the reappearance of “History of the World.” As a reminder of a peak moment in Raf’s career, it could also function as a Ground Zero for the next chapter: the relocation to Antwerp, the reconnection with his original boy-constituency (kudos to Ashley Brokaw for an excellent show casting), the cabal of loyalists drawing in to restore an equilibrium that had been disrupted by Simons’s New York adventure.

On Michel Gaubert’s enthralling soundtrack, there was a brief burst of “This is Not America,” David Bowie’s hymn to lost dreams. But it was the version from “Lazarus” the stage play based on Bowie’s music. Gaubert always played that version to close Simons’s shows for Calvin Klein. That was one plangent reminder of the recent past. Another was a couple of words that cropped up throughout the collection: STONE(D) AMERICA. Take that ambiguity any way you want it. The (Dis)United States is simply one more waystation in the series of altered states that have shaped Simons’s growing up.

That darkness aside, there was the gratifying focus here that you might expect from a designer who no longer had to wear two hats. The front of Simons’s invitation looked like an aerial view of a gigantic research facility. It was branded RS-LAB (though it was actually a photo of the sports complex in Noisy-le-Grand where he staged his show). And what he was doing in his lab was reanimating and recombining bits and pieces of Raf Past. His Spring/Summer ’97 show was called How to Talk to Your Teen. Here, that notion was distilled to a patch: How to Text Your Teen.

Other echoes of previous collections were celebrated, like a good idea has legs. And Raf’s most striking ideas were indeed often about the leg: the boxer shorts (labelled My Own Private Antwerp) with boots; the skorts, the tunics and smocks like working warriorwear. Here there were also the familiar gilets and jackets to highlight his acute tailoring. It was intensely personal, maybe even private to a hermetic fault. You might think that offputting to anyone who knows nothing of the backstory. I thrilled, for instance, to Jonas Glöer in a t-shirt sporting the logo of R&S Records, a label which soundtracked my rave years. (Yes, I had them!) But he was wearing it with a white-lapelled tux jacket whose chicness could seduce the most ardent technophobe.

It does make you wonder though where Raf might find his man now his New York years are behind him. There was a confidence – and a joy – in this collection which broadcast new beginnings, the resuscitation of idealism. There was also that familiar dark chord, the moody Belgian. You were lulled, and then, suddenly, Mica Levi was on the soundtrack, making your hair stand on edge. Meaning Simons won’t rest on his laurels, and he won’t let you rest on them either. There were scraps of fabric pinned to the odd look which seemed to be saying, “I could do it this way if I wanted.” I guess we call that a work in progress. And that’s a great thing.