Chitose Abe’s skill has been to make impossible hybrid irresistible. Here she focused less on contrast than on compatibility, fusing items that fit together rather than fought each other. 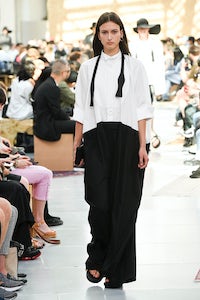 Chitose Abe’s skill has been to make impossible hybrid irresistible. Here she focused less on contrast than on compatibility, fusing items that fit together rather than fought each other.

PARIS, France — You can appreciate why a born curator like Kim Jones loves Japan as much as he does. The whole country is an education in ways of seeing. A pebble on a beach can be as perfect as an emperor’s palace. At Sacai, Chitose Abe’s skill has been to combine the pebble and the palace in an impossible hybrid. Her genius has been to make it irresistible.

With the two collections she showed together on Saturday – spring for men, resort for women – she said she’d set herself another challenge: cutting the clothes flat, two-dimensionally. It creates a new silhouette and it apparently wastes less fabric. And it echoed an experiment her mentor Rei Kawakubo conducted some years ago at Comme des Garçons, with markedly different results. There, it was obvious what Kawakubo had done. Here, much less so.

What was obvious, though, was that Abe was focused less on contrast than on compatibility, fusing items that fit together rather than fought each other. Shirts were doubled, shorts were doubled, jackets and coats were doubled to make a single new piece. Traditional Japanese fishermen’s garb, layers of clothing cut from the same fabric, inspired Abe to something similar: an oversize t-shirt made of suiting fabric seemed to be layered over a jacket. The visible jacket hem was actually a striking trompe l’oeil effect. She did it in denim as well. If fashion’s a game, Abe is a player.

Backstage, she was wearing a T-shirt bearing a quote from another player: “Yeah, well, you know that’s your opinion, man.” So said The Dude in “The Big Lebowski.” He was the spirit guide for Abe’s new collections. Another of the movie’s quotables — “That rug really tied the room together” — was apparently the crux of the notion that you could fuse a bib-fronted tuxedo shirt and pants into one big glamorous whole, a look whose volume maybe made it more trompe, less l’oeil.

Abe wanted her collections to be as direct as possible, so she kept herself to classics, in both clothes and cloth. The tuxedo, the trench, the flannel suit, the banker’s stripe, the Hawaiian shirt, camel, khaki, white poplin, her beloved MA-1 jacket (here, transmogrified into shorts)…the prosaic nature of these elements meant there wasn’t as much magic as there often is in a Sacai collection (ok, Hawaiian shirt aside). Technical skill, yes, but transport, no. Even the way in which the soundtrack danced from Mr Fingers to “Midnight Express” to “Love Hangover” wasn’t quite as zing-a-ling as usual.

What there was by way of compensation was a fascinating collaborative subtext. With Gramicci, whose G-Climbing Short is “one of the most influential pieces of all time,” according to Outside Magazine. With Sun Surf, which is where the archival prints of Hawaiian shirt legend Duke Kahanamoku came from. And with the biotech company Spiber, who supplied the innovative sustainable protein-based fabric for the t-shirts. Abe proved that you can curate the future as well as the past.