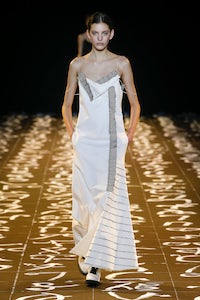 NEW YORK, United States —  This season, Danielle Sherman was inspired by Sharon Beals’ photographs of wild bird’s nests, the black backdrops and layers of random objects serving as a starting point for a number of the season’s prints and textures, including a colourful mohair tweed developed with the South African producer Hinterveld, a photo-print satin featuring a spray of random buttons, and a confetti velour. Many of the fabrics were fashioned into the season’s ribbed-collar tracksuit, which was significantly cinched to create a real hourglass shape. (The designer favours masculine shapes and menswear ideas, so this was her way of incorporating femininity into the collection.) There was a hand-done feeling to many of the details, like fluro whipstitching on a windowpane check shawl, unravelling pinstripes on a raw-edge slip dress and randomly sized buttons down the front of a knit. Those flourishes matched nicely with the shoes, a creeper-brogue combination made sleeker by taking out the tongue. 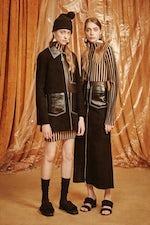 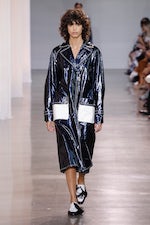 Edun on the Fringe