The collection was testament to the designer's level-headedness sensitivity to the women who wear her clothes. 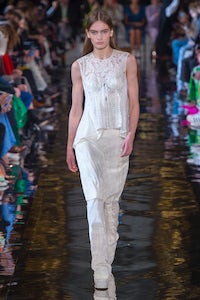 The collection was testament to the designer's level-headedness sensitivity to the women who wear her clothes.

PARIS, France — Stella McCartney’s been making news with the announcement that she might be taking over the 50 percent of her company that Kering currently owns, giving her full control. Maybe it was that cause for celebration which made me expect something a little more exultant on her catwalk, but McCartney didn’t get where she is through self-indulgence, so her show was instead another testament to her level-headedness sensitivity to the women who wear her clothes, plus a catwalk introduction to her attempt to do the same thing for men.

She did start in Savile Row, after all, and the menswear was a reminder of its influence on her, especially with men and women sharing the same oversized topcoats. Actually, there was an indulgent moment, when it looked like McCartney was trying to balance the added testosterone by showing the kitschiest clichés of femininity, enveloping prints of femmes fatales by J. H Lynch (the UK’s answer to Vladimir Tretchikoff, king of oils on velvet) in tulle peignoirs.

Maybe it was an attempt at lightheartedness but its distinct incongruity only succeeded in underscoring McCartney’s essence: the easier and slouchier the better, the less superfluous detail the stronger… and more physical equals more sensual. The knitwear made that essence come alive.