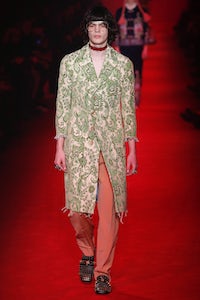 MILAN, Italy — “There is something creepy in beauty,” Alessandro Michele mused after the latest instalment of his Gucci revamp. “Every time I see something beautiful, I feel bad.” Which means his stomach must have been in agonising knots after a show which featured so much that was rich and strange and gorgeous. And yet, you kind of know what he means. Beauty is transient. Even in its more enduring forms — in architecture or oil paintings or marble sculptures — beauty will inevitably feel the cold touch of time. And all that does is remind us we are born to die.

The mere fact that Michele’s collections can send such trains of thought tootling out of the old railway station he’s selected as his venue of choice is utter bliss. Today, the space was reconfigured as a giant red-lit hall. It felt just like the reception area in the Overlook Hotel in Kubrick’s The Shining. There was even a vintage lounge act on the soundtrack, supplying the kind of rinky-dink music that accompanied Jack Torrance’s descent into madness.

“I wanted [the] music to make you feel like you were in between a dream and a nightmare,” Michele said. The red light and the huge swathes of curtain invoked the limbo land of Twin Peaks as well. You have to osmose such reference points to appreciate the worlds that Michele straddles. Between beauty and madness — there lies Gucci.

Obsession is a state of mind he is clearly familiar with. The last Gucci video was filmed in Berlin because Michele is obsessed with Christiane F, the cult movie about the city’s drug underground. David Bowie provided the soundtrack. It follows that Michele is as obsessed with him. There was a Bowie jacket on the catwalk today. Not a tribute, Michele insisted, because Bowie is an inspiration that has always informed everything he’s done.

Besides, there were other obsessions that were equally important. Walter Albini for instance. The spirit of the designer, who defined Italian fashion in the 1970s as successfully as Gucci did, could be detected in the visual excess of an Art Deco-y lurex pattern that Michele cut into a track suit (and laid over a Snoopy sweatshirt). It was a highlight of the rich seam of Las Vegas that threaded through the collection. It may not actually be so, but Michele’s affection for the Sinister Subtext would surely incline him to the City of Ultimate Sin, where too much will never be enough.

It was like that with his Gucci today. Some grumbled that it was more of the same, but that was precisely the point. More! Michele’s aesthetic is about addition, not subtraction. All forms of human life are there. A leaf-green velvet robe, trimmed with fur, embroidered with peacock feathers, preceded a white t-shirt and a plain pair of pleated pants. The top half of one outfit was a button-covered pearly king jacket over a stock-tie blouse in red silk, the bottom half was jeans tucked into socks with studded loafers. Silk pyjamas trimmed in barbaric metal, a conservative plaid coat embroidered with a huge bear’s head, grandma’s pink crocheted shawl wrapping a willowy ephebe: the art of contradiction is second nature to Michele. Hari Nef, the trans-actress who’s been ruling Gucci’s Snapchat for the last while, stunned in head-to-toe vermilion: hat, cape, shirt, trousers, shoes and sass.

“An assemblage of fragments,” declared the philosophical statement that masquerades as each season's shownotes at Michele’s Gucci. The same notes quoted Mikhail Bakunin, the father of 19th Century anarchism: “The impulse to destruction is even, and above all, a creative impulse.” The way you created fragments in Bakunin’s world was that you blew things up — creatively. History repeats. The past is never over. Gucci is then and now and forever, and Alessandro Michele is its Bukanin. 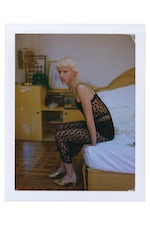 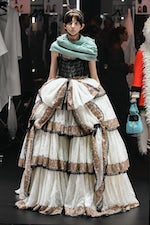 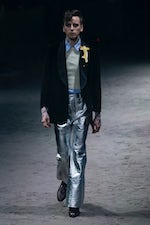 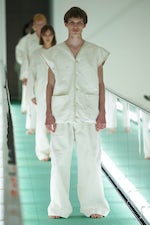