Virgil Abloh was an architect. Now he needs to learn how to become an alchemist. 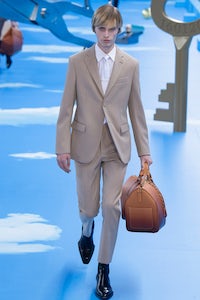 Virgil Abloh was an architect. Now he needs to learn how to become an alchemist.

PARIS, France — When Virgil Abloh arrived at Louis Vuitton, he talked about a longterm plan to track the growth of boy to man through his collections. Imagine a catwalk equivalent of Richard Linklater’s award-winner “Boyhood.” That would be one hell of a way to create a convincing through-line for a career in fashion.

Abloh is now at Collection Number 4. His original idea has become a little loosey-goosey with the passage of time. Since Number 3, Virgil had to take a step back for health reasons. Maybe the furious pace he’d set himself was unsustainable. It would be a wonder if he didn’t return to the fashion fray with a heightened sense of his own mortality. That notion added a poignant edge to the final passage of his latest show: sky-blue jackets, shirts and pants scattered with little fluffy clouds. The child stares skywards and wonders at clouds. Ice cream castles in the air, feather canyons everywhere. The Great Beyond.

I was also reminded of paintings by the Surrealist artist Réné Magritte. In his typically fulsome show notes, Abloh defined surrealism as “the instinctive act of making the ordinary extraordinary.” It’s everything fashion could hope — and need — to do to justify its place in the world. But the notion might mean more to Abloh now he’s faced down a serious challenge to his wellbeing.

His show invitation was a wall clock running backwards. It’s a common enough surrealist trope (Vivienne Westwood had a similar ticktock outside her World’s End shop), but the thought of time running back to the beginning must be reassuring to someone whose dance card of creative collaborators has been as packed as Abloh’s. There is so much to do, and there is really so little time in the grand scheme of things.

Which was why you could only wish Abloh had made better use of it when he was working on his new collection. His background is in architecture, functionality, Dieter Ram designs and Braun products. In “The Vocabulary according to Virgil Abloh,” the exhaustive A-Z that was usefully included with the show notes, W was for wabi-sabi, the Japanese concept of “naturality, simplicity and imperfection” which, for Abloh’s “digital generation,” is “the religion of authenticity in a millennial world of artifice and fabrication.” Oh for the merest smidge of wabi-sabi in the collection Abloh showed on Thursday. He is solid with the straightforward. Faced with fashion, he flounces.

The collection lacked coherence. And it ought to be a golden rule that constraints fuel creativity. Here, enough became too much in the blink of an eye. Flamenco ruffles ran up and down and sideways. A dusting of crystal became a dandruff blizzard. Blown-up broderie anglaise looked like a school project. Jackets and coats slashed and spliced back together with Frankenstein stitching were Freddy Krueger Kouture. Freddy had also scissored apart a pile of shirts to make a banker stripe collage. Then a coat went by with a collar and tie stitched to its front. That felt curiously familiar.

Kids might have fun with it. You could say it was surrealism at work. You could also say some of those pieces were the collection’s most extreme expressions of Abloh’s re-coding of the street and the sartorial. Hybrid forms are unions forged in chaos. But there was no room for “the religion of authenticity” here. Even the most legacy-laden pieces — the bags — were warped.

It was an odd fashion coincidence that Alessandro Michele showed a collection about time and childhood in Milan on Monday. His show space was centred on a huge pendulum swinging inexorably. Abloh’s catwalk flowed around a huge tree, like the ones that ring the house of Louis Vuitton in Asnieres-sur-Seine, the soul of the whole massive business. In that sense, it was literally the Vuitton family tree we were looking at. Nearly two hundred years of continuity, of turning something as ordinary as a bag into a totemic object of desire. Virgil Abloh was an architect. Now he needs to learn how to become an alchemist.