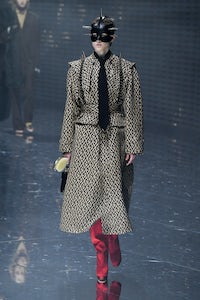 MILAN, Italy — Was this show Alessandro Michele’s vision of Heaven and Hell? On the soundtrack, there was the celestial celebration of the Archangel Gabriel in a Basque hymn. The set was a gigantic mirrored dome, seared by flashes of dazzling light. Some of Michele’s models walked with faces streaming with gilded tears, the lacrimae of the saints. “Trying to trigger something emotional,” he said. Other models were collared and crowned in Hellraiser spikes. There was a priestly white lace surplice, and there were carnal little dollybird dresses (kneepads for added suggestiveness). Michele’s lust for decoration yielded the pleasure of a gorgeous coat embroidered with the signs of the zodiac. It also gave us the pain of Van Gogh’s severed ear, cast in gold as an ear cuff.

Did I really just write that? More to the point, did Michele actually say it in his post-show press conference? His Gucci has never been less than a long, magical passage through the looking glass. But two things stood out on Wednesday. One was a different kind of discipline, more tailored, stronger shoulders, nipped waists. The other was an unusually aggressive edge. Gucci recently weathered a media storm that arose round a piece of clothing that was read in the United States as a blackface reference. In Michele’s mea culpa, he wrote that the item in question had, in fact, been inspired by his love of transgressive Australian performance artist Leigh Bowery. Which underscored the fact that the chasm of mutual cultural incomprehension was unbridgeable. Leigh who?

But in this collection, Michele again returned to the mask as a dominant motif. In addition, he added to the shownote mix the philosopher Hannah Arendt, whose writings about totalitarianism were some of the most influential political thought of the 20th century. She also wrote about the masks that people maintain to preserve their place in their environment. Maybe the shownotes were paraphrasing her: “Playing with the magic ambiguity of masks represents an occasion to recover the creative roots of our being alive.”

Except that Michele’s masks seemed drawn from the annals of horror: not just Hellraiser, but also Friday the 13th, and Hallowe’en. The notion of the mask as a release for whatever lies beneath (‘the mask becomes the means through which we can become what we feel we are”) is the joyous root of carnival in Venice and Rio. It’s also a shield for the terrorist and the serial killer.

Michele balanced these associations with candy-coloured knits that read ICE LOLLY or SUCKER, and juicy, primary colour-blocking, and some splendid suits, and a whole lot more of that stuff that flatters and feeds your fantasies. (Lace jabots! Lush faux fur stoles!) But, coming back to those masks, there was a distinctly political edge. “Fashion is politics,” Michele said. “Maybe there’s an unconscious statement I’m making, something escaping me I can’t grasp. I will defend the beauty of knowledge.”

He closed his press conference by saying he’d been born in a city with a Pope that yet remains rooted in the ancient world. “I was liberated by the gods,” he said. The pagan spirit that pervades his Gucci is light and dark, good and evil. All forms of human life are there. And, in all that, Michele stands alone, without equal in his industry.