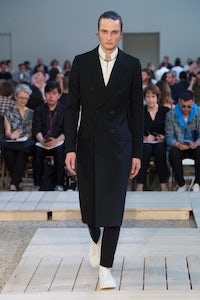 PARIS, France — Sarah Burton’s women’s collections for Alexander McQueen have found a primal sweet spot, combining the pagan, the instinctive, the artisanal and the sophisticated in a subtle yet powerful brew. Her men’s collections, on the other hand, have lagged, dogged by an academic, historical approach to design. Thought, rather than felt (though, to be fair, the same problem plagued Lee McQueen’s own men’s collections).

So Burton set herself a clear and present challenge with her men’s collection for Spring 2018: apply her womenswear principles to her menswear. It was trips to Scotland and the Wiccan depths of Cornwall that helped form recent women’s outings. “I wanted to ground the man, make him real, not historical. I was looking at explorers, adventurers, survivalists, men who are at one with nature and themselves.”

So that was in Burton’s head. But it wasn’t initially on her catwalk. Instead, we saw an opening of rich but rigorous tailoring, a classic McQueen libertine. There were subsequent echoes of that formality (Lee loved a camel coat — here, there was a patched-up beauty), but really, that character had been established early on so he could be shredded as the parade proceeded.

The fetishistic strictness of a red leather coat was followed by a black leather biker suit zipped to madness and an exploding shearling, the stuffing knocked out of it. In the interests of Burton’s “reality”, the leathers began to show up washed and worn. They counterpointed the purity of broderie anglaise detailing.

In a flash of enlightenment, it became apparent that McQueen's reality is parallel, but none the less appealing for it. And, applied to the men's collection, it unleashed a tide of wayward associations. A sequence of items printed with Rudyard Kipling’s orienteering maps trailed red thread like tiny rivulets of blood.

I was thinking of St Sebastian, but Burton was quick to correct any religious connotations. Spiritual, maybe. The trailing threads became a motif, with one of the Shetland carpets from her women’s collection for Spring 2017 turned inside out for a coat. Burton’s preoccupation throughout the collection was the unravelling of the McQueen man. It was literal in those last pieces, culminating in the Tree of Life, its silvery roots feeling their way off the hem of a coat.

But why unravel the man? It wasn’t simply an acknowledgement of beauty in imperfection. “I do have this feeling that in nature things are more powerful than you,” said Burton. That sense of surrender and awe has coloured her womenswear. She wants the same for her men. “I need to understand whether the man can live in that world,” she continued. “I think he can."

Maybe it’s too soon to determine that, but if it wasn’t necessarily optimism that shaped the essence of her collection, there was definitely a new spirit, an expanded consciousness which bodes well.