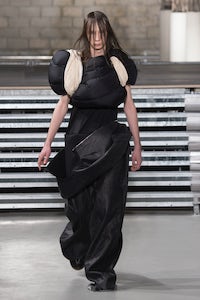 PARIS, France — Before his show on Thursday, Rick Owens was remembering the best advice he ever got: “Life isn’t fair, get over yourself.” He claimed he’d felt dogged by a sense of impending doom, even panic, for a while, but now it was time to lighten up. “You can’t be afraid forever in a moment where there’s a lot to be afraid of.” So he took his cue from the Parisiennes who would wear ever more ridiculous hats to taunt their Nazi oppressors during WWII. “Doing things that are extreme, a little ridiculous, taunting”. Owens decided that would be his response to the new oppressors: designer as Dionysus. And he attached the title Glitter to his show, “because the glitter era in the early 1970s was also a reaction to ominous turbulence.”

Owens acknowledged he could have gone further with his own reaction. “If I’d really gone all out with my Dionysian story there would have been more flesh and sensuality,” he said. “But I never do that.” Instead, he made his stand with what he defined as a new sense of luxury and extravagance. True, the silhouettes touched on extravagant new extremes: sculptural leather jackets whose shoulders defied corporeal logic, hourglass blazers with Seuss-like sleeves extended floorwards, torsos unzipped and folded down to form chrysalises of fabric from which the models emerged like new life forms. Duffy’s hair design favoured a skullcap with a fine RiffRaff veil of hair drawn over it, creepily Living Dead in its own way but also the Owens equivalent of those French women in their ridiculous hats.

He felt he’d been so earnest for so long with his collections that it was time to wallow in beauty. But, in the end, Owens realized he couldn’t fight the power. As extreme and artificial and decadent as his new forms wanted to be, they ended up broadcasting a message of protection for the hard times ahead, as though the weight of his thoughts couldn’t help but shape his work. “Padded up, strapped up, wrapped up, all this stuff is like you’re buckling up for a bumpy ride,” he sighed. “All I can think about is war. I was watching my cat torture a mouse the other day, and I thought, ‘There’s a place for this in the world, cats have been torturing mice forever.'” There’s always been something shamanic about Owens. With ominous turbulence once more in the forecast, his leftfield profundities will only become more so.