BoF’s Editor-at-Large revisits his top fashion shows of all time, starting with the first Paris presentation he ever covered, back in the go-go Eighties. 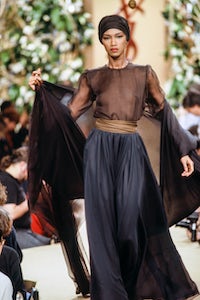 BoF’s Editor-at-Large revisits his top fashion shows of all time, starting with the first Paris presentation he ever covered, back in the go-go Eighties.

In 1988, a writer from a local fashion magazine in Toronto was clearly small beans to Denise Dubois. The formidable redhead who, as press director of the Chambre Syndicale, the organisation that controls the Paris collections, had the ultimate yea-or-nay over who received show invitations. But I had an ace up my sleeve. The equally formidable Krystyne Griffin was, at that time, the President of Yves Saint Laurent Canada, and so it was that I came to be gracefully guided into the ballroom of the Hotel Intercontinental in the last week of January to experience my first-ever fashion show in Paris. The fact that it was Saint Laurent’s haute couture presentation for Spring 1988 was scarcely lost on me. YSL was fashion’s ne plus ultra, the genesis of dozens of now-classic looks, the wellspring of inspiration for hundreds of other designers, the source of thousands of scintillating anecdotes for any inveterate reader of W magazine, then in its barbed prime under the gimlet-eyed direction of John Fairchild.

I knew, for instance, that Nan Kempner, Manhattan’s quintessential social x-ray, had been denied entry to a fancypants New York restaurant because she was wearing a YSL trouser suit. So, she whipped off her fancy pants and entered the restaurant clad in the jacket alone. And who was the first person Krystyne and I encountered as we made our way to the ballroom? Nan Kempner, of course! I perspire at the best of times, I hadn’t yet had my blackened front tooth fixed, and I can’t imagine I was wearing anything other than an old cardie and baggy pants. The only things missing were straw in my teeth and a piglet under one arm. But Nan was as unflaggingly gracious as she would prove over and over again in years to come. Then she moved ahead of us and I saw The Ankles, the joints on which Nan’s sinuous ambulation depended. They were so slender as to be supernal, as though her whole body rested on two slim cylinders of Murano glass.

And that was my introduction to the rarefied world of high fashion, at least as it existed in the last gasp of the go-go Eighties.

Saint Laurent’s collection paid tribute to artists: Picasso, Braque, Van Gogh, Matisse. Not for the first time. The primary colour-blocked shift from 1965 that saluted Piet Mondrian might be his most iconic creation. But here, Saint Laurent’s artistry, in tandem with the embroidered artisanship of the Maison Lesage, produced transcendent effects: 350,000 sequins, 100,000 beads, 600 hours of work by les petites-mains in the Lesage ateliers to re-produce Van Gogh’s Irises or Sunflowers on an evening jacket. The work was so detailed as to reproduce the original brushstrokes.

At the time, those extraordinary pieces had less of an effect on me than YSL’s embrace of Georges Braque. I’d always loved his work, relished the debate about who was top dog in the highly competitive collaboration between Braque and Picasso. It was dislocating but exhilarating to see their Cubist masterpieces reproduced in pieces of clothing, and all of them worn by YSL’s family of catwalk stars, supermodels before we’d even heard the names Linda, Christy, Cindy… although destiny was already in play with a 17-year old Naomi Campbell, who walked in this show wearing the Sunflower jacket.

I remember Diana Bienvenu in a broad-shouldered pink satin jacket embroidered with a Picasso guitar; Sonia Cole in a black grosgrain suit with pink-feathered Braque doves flaring from each shoulder; the Senegalese beauty Sadiya Guèye, the traditional bride, here anything but in a ruched white mini-dress with huge white doves swooping around her body. Most of all, I remember YSL’s Guinean muse Katoucha Niane in a column of navy satin, mounted with a sequinned tabard of Braque guitar and doves. I think this still represents the purest confluence of art and fashion, even as our own era has endeavoured oh so diligently to merge the two worlds.

Ah, Katoucha. She was the essence of YSL at that time. She elevated anything she wore, which is probably, perversely why my favourite section of the show was the most somber. That was usual for me with Saint Laurent in his pomp. Even though he was the greatest counter-intuitive colourist in fashion history, it was the sepulchral shimmers he created with his layering of dark, sheer mousselines or chiffons in shades of black, navy or cocoa that I loved the most. The designer draped Amalia Vairelli, another of his favourites, in navy chiffon then swathed her in lilac satin, clasped at the shoulder with a gilded Braque dove. A beturbaned Katoucha, in floor-sweeping navy chiffon, made a strikingly funereal contrast to her reappearance 22 looks later as a Cubist fantasia. It’s tempting to think that Yves recognised a kindred darkness in her soul. She would mysteriously drown in the Seine almost exactly twenty years later.

Speaking of funereal, the show was long, 138 looks moving up and down the catwalk at the stateliest pace. But it has resonated forever with me, not only because it was my first encounter with capital-F Fashion, but also because it showed me things that were quite unlike anything I would ever see again. And it reverberated culturally. I’ve read that Saint Laurent always anticipated his key creations being exhibited in the museums of the future. He designated them as such with the word “Musée,” handwritten on the label. How happy he would have been that one of those Sunflower jackets, originally modelled by Naomi, was sold last November to the National Gallery of Victoria in Australia for €382,000.

The images in this review, courtesy of Getty Images, are not the full Yves Saint Laurent Haute Couture Spring/Summer 1988 collection.