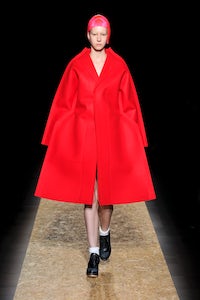 There have been works of art that presaged the future for me in ways that weren’t immediately comprehensible: Nico’s album The Marble Index, Nicolas Roeg’s film Performance, Two Serious Ladies by Jane Bowles. I’d add Rei Kawakubo’s Autumn/Winter 2012 presentation for Comme des Garçons to that list because it is the show that instantly springs to mind every time I’m asked if I’ve ever wished I could re-evaluate something I’d written. Mea culpa: I’ve spent a professional lifetime passing opinions on fashion shows under usually swingeing deadlines so it makes sense ya can’t win ‘em all. When the moment speaks, it doesn’t always accommodate reflection. I genuinely loved Kawakubo’s collection, but hindsight has harassed me ever since for making undue light of it.

“The future is in two dimensions” was the typically gnomic précis she offered after a show which featured dresses, coats, jackets and pants that were determinedly 2D. Like paper dollies, minus the tabs. Head on, the silhouette was oversized, curved, vaguely circular. From the side, it was flat as a pancake, like the clothes had arrived flat-packed and were then stitched into cartoonish shape. The colours were primary red and blue, or girlie pink, baby blue and lilac. The prints were leopard, polka dots and camo, or big Warholian flowers and kitsch roses. The main fabrics were felt and velvet, though there were five “evening” dresses in – what else? – pavé-ed sequins. There were no details, no accessories, unless you figured in the plastic bobs that were moulded to the models’ heads. The catwalk was bare plywood. The soundtrack was silence (“the soundtrack of nothing”, observed one commentator). At the time, it felt to me like a reductio ad absurdum, fashion’s most clichéd building blocks delivered in the most basic way. “Design without designing,” Kawakubo herself said later.

I read the collection as a comment on the Internet’s impact on fashion. At the time, I was reviewing for Style.com, and a conversation I’d had with trend guru Li Edelkoort came back to me. She’d told me she thought the worst thing that ever happened to fashion was the popularity of Style.com because it reduced a show’s three-dimensional celebration of creativity to a dull two-dimensional procession of head-on, head-to-toe sameness. Death by thumbnail!

What a fooI I was to attribute such a literal response to Kawakubo, although my assumption would probably have gladdened her heart, if you believe what she later wrote about not being happy if her collections were understood too easily. I wasn’t the only onlooker who misread Autumn/Winter 2012 as a comment on the Internet. Nothing to do with that at all, she insisted. Why do I imagine a half-smile as she wrote that?

So what was Kawakubo saying? Perish that thought for even thinking it. It’s only lately that it’s been possible to draw a clearer line between her work and the world in which she makes it. I would even hazard a polemical tinge in recent collections as fierce as Autumn/Winter 2019’s ritualistic “gathering of shadows”. But all those decades of cryptic summaries do add up to a distinct ethos. If Kawakubo described Autumn/Winter 2012 as “design without designing”, she also mentioned “Ignore the body” as another touchpoint for the collection. Also, “The absence of concept is the concept itself”.

But the statement that sticks with me now as the most apposite is this: “Often the simplest thing is the hardest but the most powerful”. When I think back to that show in March 2012, I realized now what I missed. I thought the models walked in silence. They didn’t. They walked to the steady human drumbeat of their own footfall. Then there was a momentary surge of romantic electronica when the sequins appeared – the soul singing.

And the show wasn’t detail-less. Those synthetic helmets aside, there was a mid-show interlude when five looks in floral-printed velvet claimed the runway. The heads of the models were completely encased in fabric, slashed to reveal one eye. One of them wore a pointed hood. The calculated “design-less” banality of all that came before and after instantly dissolved in a potent, provocative eeriness. Now, it has a distinctly predictive edge.