The designer’s neutral line up took an interesting turn with a full spectrum of colour. 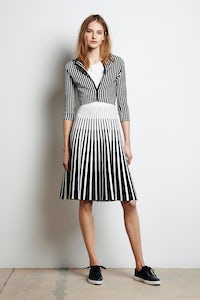 The designer’s neutral line up took an interesting turn with a full spectrum of colour.

NEW YORK, United States — It’s become de rigueur for designers to talk about seasonless dressing, especially during the pre-collections. The phrase “buy now, wear now” is so frequently deployed at showroom appointments that it has lost much of its meaning.

But Tomas Maier dislikes the moniker “Pre-Fall” more than most. “It is an absurd season that makes no sense to anybody — especially the women buying it," the designer dryly declared at his Madison Avenue showroom, referring to the fact that Pre-Fall collections start shipping in late April and early May, long before the heat of summer.

Maier’s namesake collection really does feel seasonless, however, driven not by seasonal inspiration but a more constant underlying philosophy. “With this, my concern is the necessary,” he said, wearing a good-looking pair of grey corduroys from his men’s collection. On the other hand, at Bottega Veneta, where Maier has been creative director since 2001, the designer says he is thinking about the “exceptional.”

“Necessary,” though, does not mean one-dimensional. Just consider Maier’s black taffeta blazer. Worn with a pair of pull-on navy gabardine pants and white sneakers, it’s right for day, almost serving the same purpose as a rain jacket. But the formal fabric is right for evening as well.

While the designer’s jacquard-knit dresses and belted, featherlight-polyester day frocks came in the modern woman’s favourite shades — black, white, navy, and putty — he showed he was unafraid of colour with a vignette of sporty, inventive looks that owed a little bit to 1980s aesthetics. A satin bomber was punched up in rose and teal, with athletic ribbing at the wrists, while a pair of silver boxing shorts — as fetching as an a-line skirt — was accented with a striped yellow waistband. The rainbow-knit pleated skirt, a sure-fire hit, was topped off, and toned down, with a quilted jacket in gunmetal-grey satin. Using formal fabrics — and just the right amount of colour — Maier created welcome tension within traditional silhouettes. 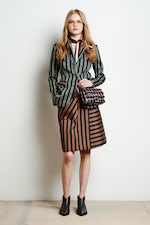