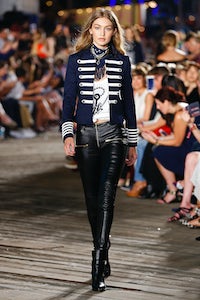 Later on that evening, the Twitterati was playing a guessing game of how much it cost the PVH Corp.-owned company to put on such an event.

But the marketing dollars spent on funnel cakes and temporary tattoo parlours likely pale in comparison to the cost of showing clothes in-season, which was the impetus behind this red-white-and-blue fever dream. Every single item on the runway could be bought online immediately, and at physical retail stores across the globe within 24 hours. The bigger question of the evening was not whether Hilfiger would show his guests a good time — he certainly did — but whether they would want to actually buy.

In the past, the clothes at Hilfiger’s shows weren’t necessarily for consumption. They were costumes selling a dream. This season everything felt more tangible: tougher, younger, less precious, like Hadid’s oversize leather jacket paired with gold-threaded, thigh-high tube socks or the Hilfiger Collection flag hoodie in velour, a throwback to the label’s 1990s heyday. There were silk bombers, necklace bandannas, and zip-up mini skirts, too. Sexy, totally commercial and sizzling with desirability.

The gut says that the brand did more than enough promotion to ensure people will be compelled to purchase what they saw. (Indeed, many attendees who hopped into taxi cabs right after the show found a TommyXGigi advertisement streaming on the back seat video.)

But all this talk of in-season fashion has made the industry forget the bigger problem: it is not cold when Fall clothes hit stores and it is not warm when spring clothes arrive. Tonight at Tommy Pier, Hadid and her cohorts walked the runway in heavy jackets, sweatshirts and knitted jumpers as the audience’s brows dripped with sweat: It was well above eighty degrees Fahrenheit and humid as anything. No one wants to buy a sweater in heat like that, right? Next February, Hilfiger and his team might be smart to consider adding a few heavy coats when debuting Spring 2017 in the icy depths of winter.