Perhaps the explosion of heavily branded, graphic logos was all the more noticeable in a menswear season missing Gucci, Bottega Veneta and Burberry, which have integrated their menswear collections into their womenswear shows, leading to lighter schedules all round.

This season, it was designers who tapped innovative design and silhouettes — rather than graphic branding — which stood out from the crowd. BoF brings you the top 10 shows of the Spring/Summer 2018 European menswear season. 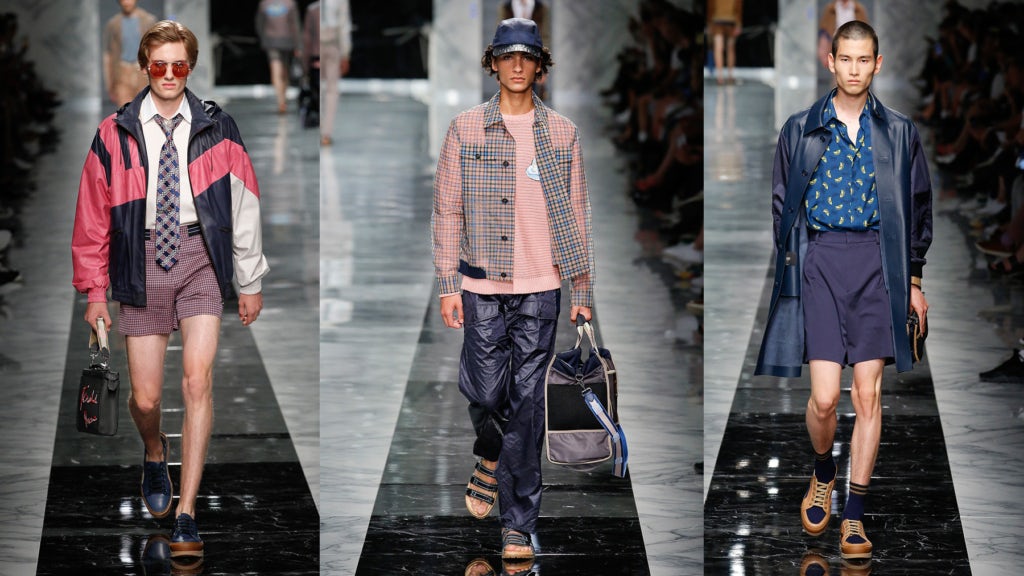 The set looked like the marbled lobby of an office building (Fendi’s Roman HQ), the models entered through an elevator or, for the finale, through the turnstiles that are now prerequisites for corporate security. The clothes, on the other hand, were more Warhol than Wall Street in their typically Fendi integration of polar opposites, delivering a certain liberating subversion. 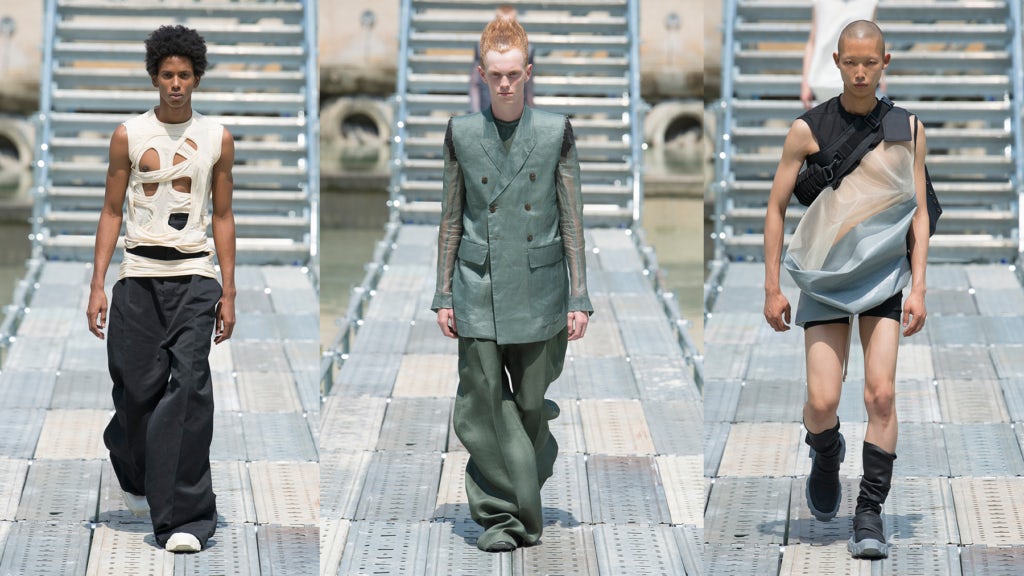 “Discipline… and modesty… and contribution…” Rick Owens was reflecting on the qualities that he hoped underpinned his latest collection. Then he caught himself, with a laugh, “…as I create this huge, theatrical, bombastic set.” True, the scaffolding that towered over the Palais de Tokyo’s parvis was as monumental as D.W Griffith’s legendary Babylon set, but there was a curious something about it that did actually connect with those qualities Owens listed. 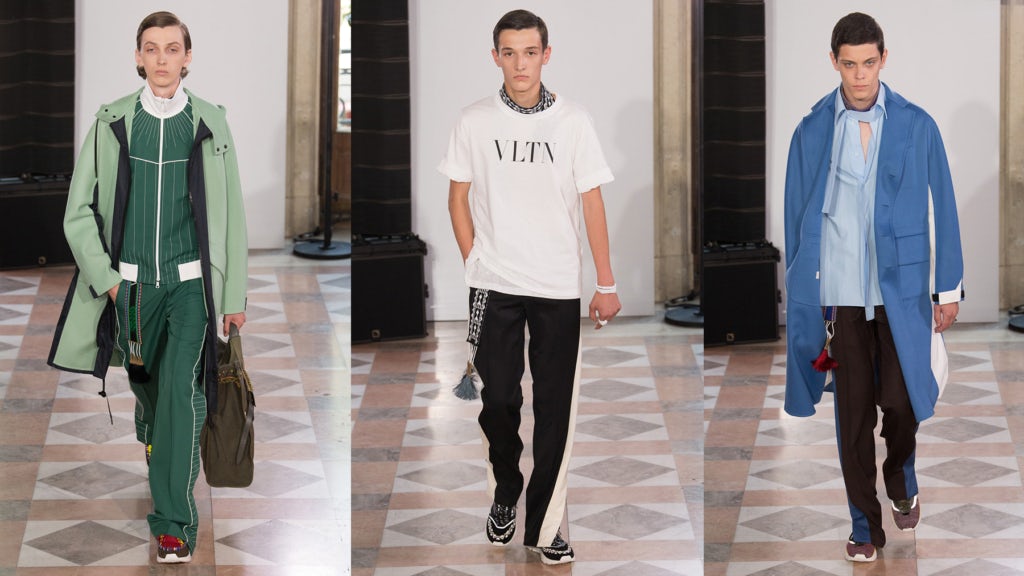 Piccioli brooding on the tension between contrasts guaranteed that the men’s collection he showed last Tuesday night was a career high point for him. “Vulcan and Mercury,” he mused. Count on Italians to think about gods in a conversational situation, but what he was trying to convey was a face-off between dynamism and intimacy: the spontaneity of the street, the culture of uniqueness that shapes haute couture. 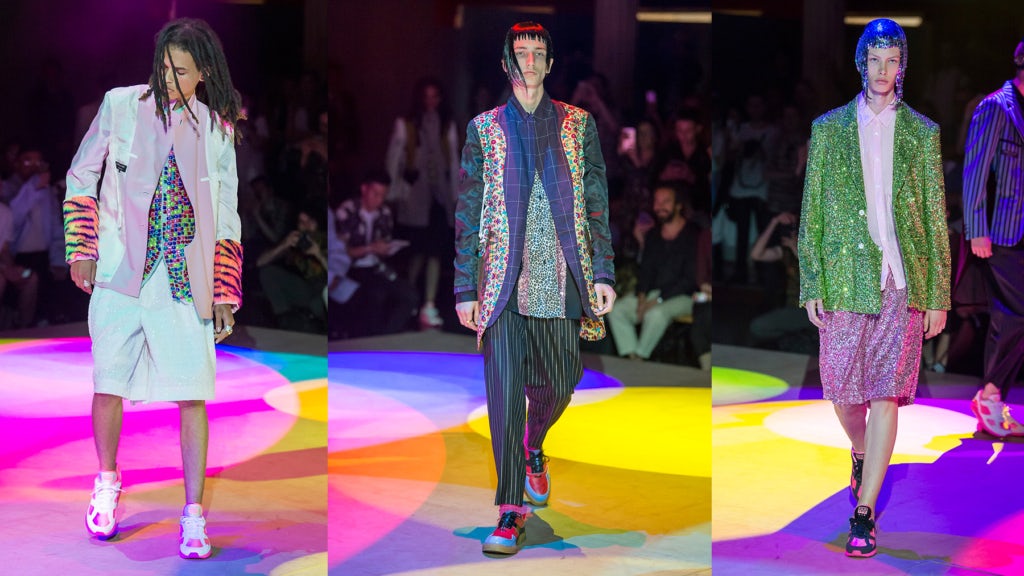 Kawakubo’s message was this: What’s on the inside matters. All the jackets were turned inside out. So the incredible patchwork of sparkle, fake fur and animal print that we saw was actually a lining? You could scarcely picture a more vivid analogy for the crazy turmoil of anyone’s inner life at this particular moment in the decline and fall of western civilisation. But it was so upbeat, sweet even. There were shirts and waistcoats that looked like they’d been composed of candy. And the stumbling self-consciousness of the models (who really wants to dance in front of an audience?) was a charming antidote to the otherwise-frostiness of this season’s runways. 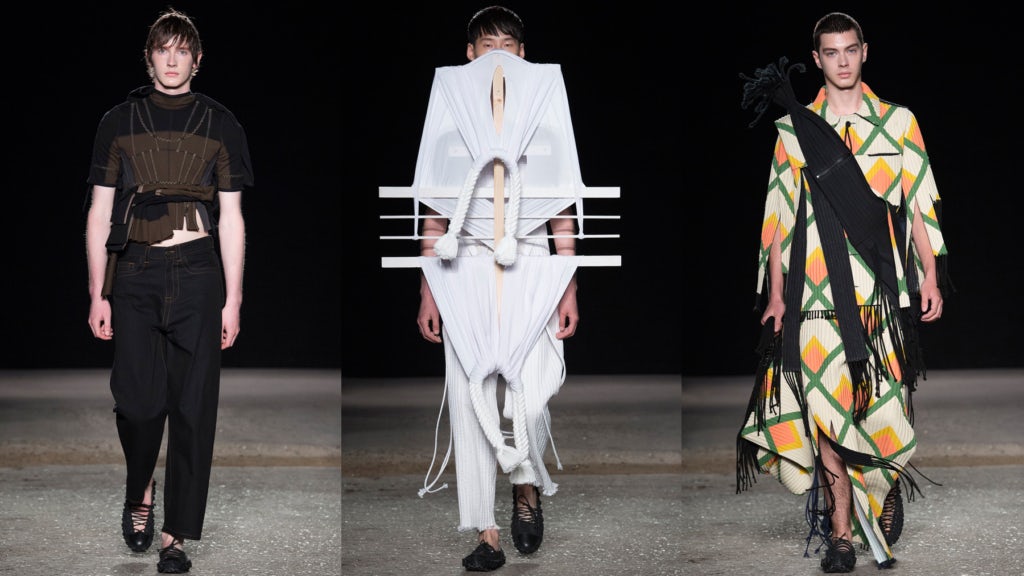 The denim, with that single signature hole (to release the soul, if you feel like attaching some deeper meaning), pointed towards Green’s astute mastery of his label’s commercial needs. In fact, that ability, now proven, to make things which sell, was what liberated Green to produce those fabulous finale looks. Their patterns looked like a cartographer's fantasy. Is that what the show notes meant about “new maps of self-exploration?” 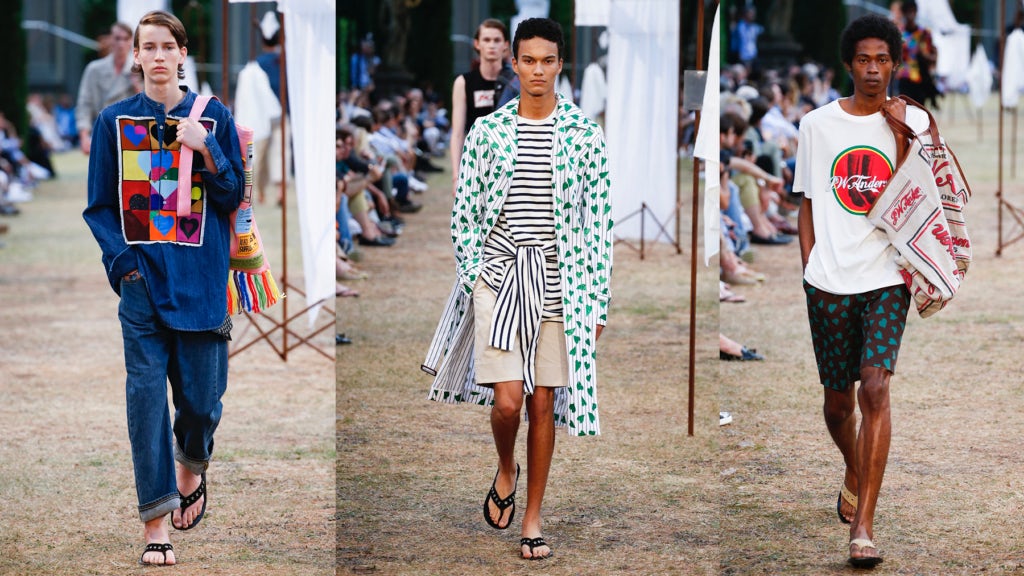 The clothes were, surprisingly, normal — as in commercially viable and something you'd actually want to wear, not the painstakingly curated stuff that's just good for magazine editorials and the occasional diehard fashionista. Anderson said the collection was all about himself being in Florence, like a tourist, and an idea of normality. Which, in fact, explains the naive jumpers, slouchy jeans, sturdy perfectos, trenches and all the rest. 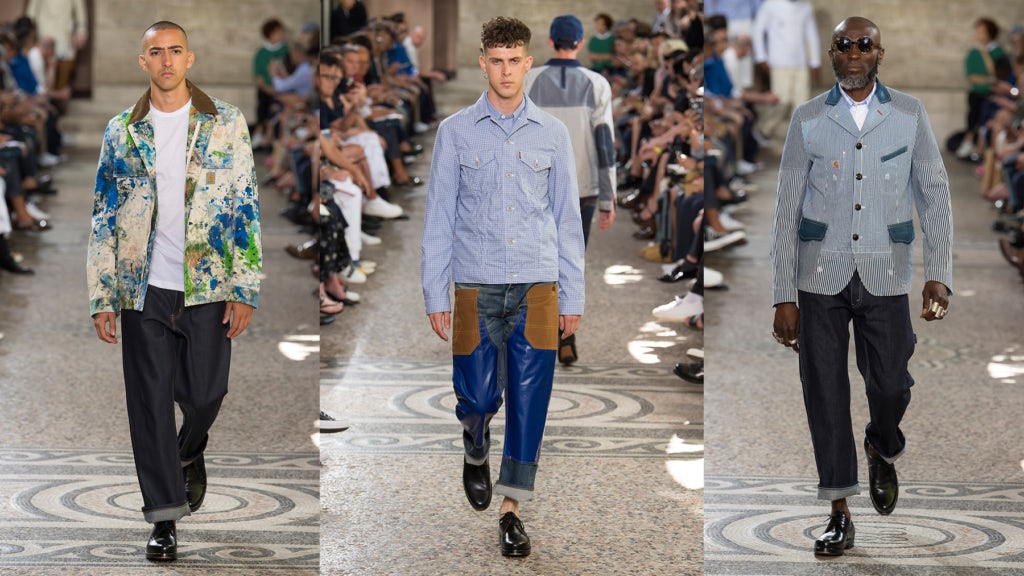 Beyond ingenuity, this collection was also a celebration of utilitarian aesthetics. Some of the models wore painter’s pants. So some of those pants — and jackets and coats — were smeared with paint. A work jacket, blossoming with explosions of colour, was the piece of the season, to these eyes at least. Making something functional into a thing of beauty — that strikes me as fashion’s highest achievement. 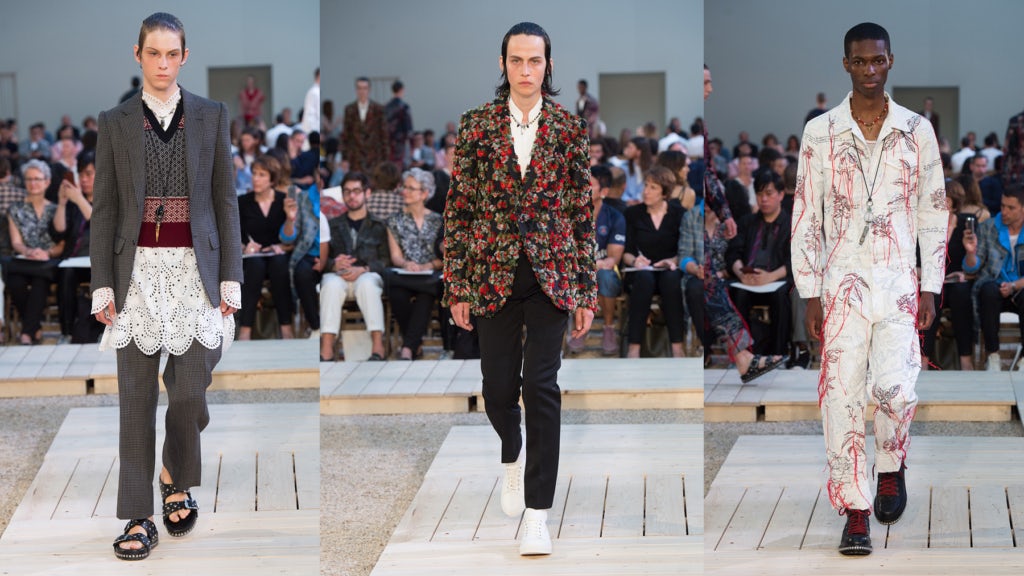 We saw an opening of rich but rigorous tailoring, a classic McQueen libertine. There were subsequent echoes of that formality but really, that character had been established early on so he could be shredded as the parade proceeded. Maybe it’s too soon to determine, but if it wasn’t necessarily optimism that shaped the essence of the collection, there was definitely a new spirit, an expanded consciousness which bodes well. 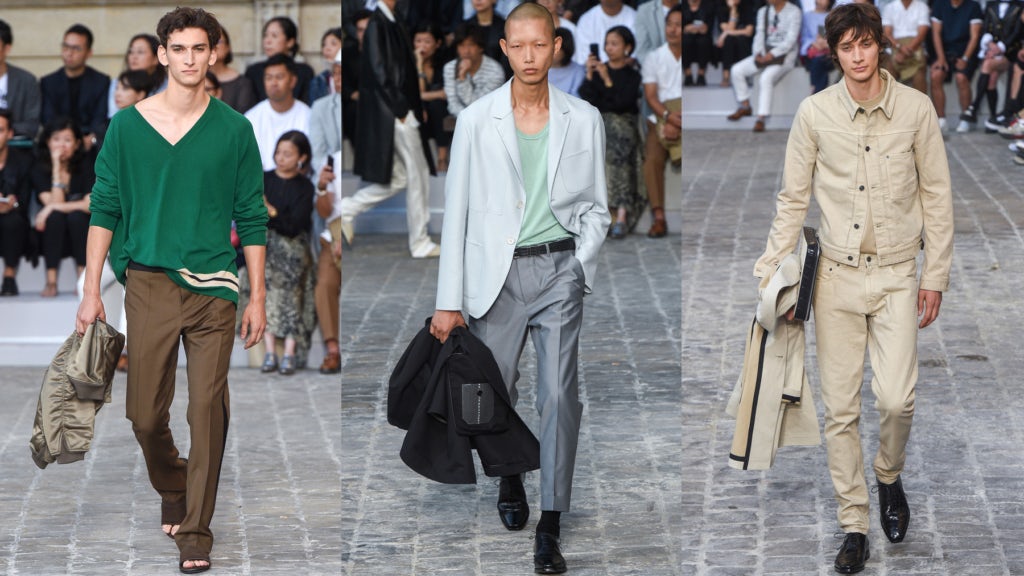 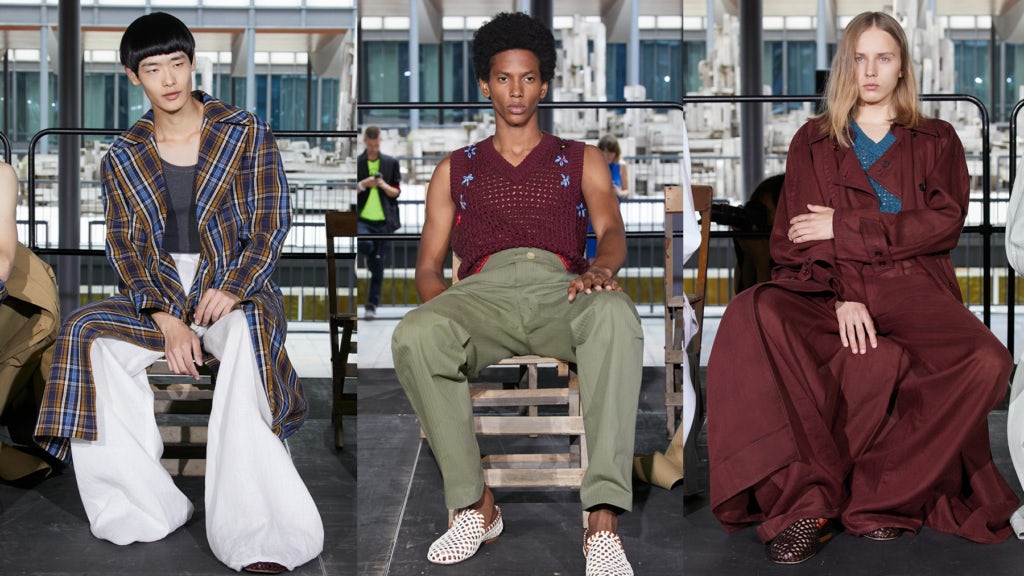 Acne Studios has been at the forefront of the current oversize craze. This season, however, the dramatic volumes looked like something with real life beyond the show. It was also interesting to see Johansson taking a healthy distance from the heavily-branded, boldly-logoed sportswear that has taken over Paris. Acne Studios' own brand of escapism felt organic and real, not glittery. Well done.