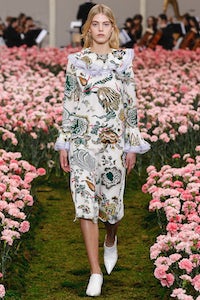 NEW YORK, United States — Though the stylist is the designer’s conduit, there are times you feel they can hinder more than help. But Tory Burch has found the perfect foil in Benjamin Bruno. Best-known as Jonathan Anderson’s right hand, he’s worked with Burch for a couple of seasons, and the result has been a visible shift in emphasis for the collection. Tory’s greatest asset was always the charm of a cultured magpie sensibility, plucking beautiful little shards from books and pictures and trips she took. There’s a lot more quirk on display now.

Valentine’s Day is upon us soon, but the romantic mood here was more complex. The live soundtrack was swoon-worthy, with the Chamber Orchestra of New York playing Max Richter’s recomposition of Vivaldi’s "The Four Seasons" (and Massive Attack’s "Unfinished Sympathy"). There’s always tristesse in Richter’s beautiful music. The models walked through a field of pink carnations, the idea borrowed from a Pina Bausch performance called "Carnations" (another conflictedly romantic notion). Their spring prettiness made a stark contrast with a wintry freezing New York morning.

The clothes steered a similar course. There was a conventional sweetness in pierrot collars, frilled hems and floor-sweeping mousselines and tulles, but the Burch women sharpened it with their own tough, sporty touch, nonchalantly throwing cardigans, curly shearlings, parkas and utilitarian quilted jackets over long floaty scarf-hemmed georgette, or pairing a plissé shirtdress with indigo denims. The collection was dominated by a graphic botanical print Burch said had been inspired by Lee Radziwill (it was called Happy Times after her memoir). It had a hint of thistly wildness. The impression was of a collection coming together somewhere between town, country and a bookish dream state. That may well be the place where Tory Burch is happiest.