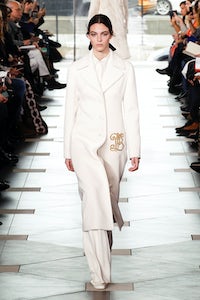 NEW YORK, United States — The risible misspellings in the tweets of Nancy DeVos’s Education Department this week suggest that literacy and accuracy aren’t high on the agenda they’re cooking up for the nation’s schools, which made Tory Burch’s Valentine’s Day acknowledgment all the more poignant.

On every seat at her show was an Everyman Library Pocket Book of love letters or poems, embossed and dated with her own library stamp. This, from the woman who takes the time and care to choose arcane first editions as Christmas gifts. You could almost imagine a day when Ex Libris Tory Burch became fashion’s battle-cry for book-learning.

Such detail is a testament to Tory’s eye, as are the collections she creates. Her latest was possibly her most complex in its wayward dressiness. She had in mind Katharine Hepburn’s patrician skittishness in The Philadelphia Story. “Obsessed!”, Burch said of Hepburn. “That tomboy femininity… she was outspoken but not angry.” This feisty Hepburn makes more sense as a fashion icon for now than that other skinny one in the black dress, and Burch made the most of her in an opening of winter white, with TB in scrolling gold monogram.

It set the scene for a show which toyed with illusion. “Everything looks richer than it is,” said Burch, ever the astute businesswoman. “It’s about perceived value.” So the impressive fur coat was faux. But, more to the point, it looked expensive. Like the long satin dress with the Pearly King button decoration, or the gold-printed velvet gown. And the outdoorsy outfits were scarcely less: the plaid tweed jacket with the matching stock-tie blouse and rich caramel cords, or the same corduroy used in a skirt with a lamé blouse and cream cabled cardigan. This was tomboy femininity with a Centurion card.

In that, it felt a little less easy, less cheery than a Tory Burch collection usually does. Part of the reason she identified with Kate Hepburn was the shared Philadelphia High Line background. Maybe that weight was just too real to sustain her usual light touch. Some models wore a pendant inspired by her father’s cigarette lighter, putting the pater in patrician. And we're currently getting a daily reminder that Daddy doesn't know best.