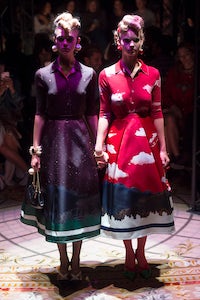 PARIS, France — The music Wendy Carlos wrote for "The Shining" is just about the most ominous soundtrack in movie history, and when Jun Takahashi opened his show with it on Friday, there was really nowhere for him to go but CREEPY TWINS. So he did. Pairs of women moved awkwardly hand in hand from one pool of light to another in the crepuscular ballroom of the Grand Hotel. One’s outfit was a slightly twisted mirror image of the other: plain here, printed there; matte here, shine there; flat here, fuzzy there. What no one in the audience could know was that each look reversed to the other. Completely interchangeable! This technical feat was so mind-blowing that it compelled a suspension of judgement on the actual substance of the looks themselves. Some worked (the more structure, the better), some didn’t (the less structure, the worse). But who cared, when Jun Takahashi had pulled off a magic trick that was quite the equal of any Vegas headliner?

The collection had a totem, the American artist Cindy Sherman, who has made a substantial career out of assuming a multitude of female personae in her work. Takahashi said he’d known her for a number of years, and the performance element of her art was definitely a factor in his presentation. At the same time, it was irresistible to conjure up broader connotations. A topsy-turvy world, where nothing is as it seems (the news is fake, remember?); the untrustworthiness of appearances; the unknowable heart that beats in the bosom of the people we think we know best…yep, you could really run with this one. LOVE ANIMAL declared one look. HATE HUMAN replied its partner. Duality is a core of the human condition. Here, it also added a frisson to the fashion.

Takahashi closed his show with real identical twins, done up like the little girls in "The Shining". In his Grady bunch, one girl was dressed in pristine white, the other in the same look streaked with red thread, as though recently axed by her psycho dad. The visual reference might have been Kubrick’s film, but the presence of the twins confirmed that fashion’s singular and unforeseen influence this season is Kubrick’s source, Stephen King. Best prepare yourself for incoming evil clowns next season.