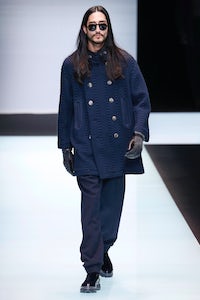 MILAN, Italy — Giorgio Armani managed a fashion first today when he claimed inspiration for his signature collection from William Burroughs, the arch subversive of the American literary scene in the 1950s. Quite what one of the most successful fashion designers in the world could have in common with the man who wrote “Naked Lunch” was a tease, less evident in outfit than attitude. Armani has always had an affection for cultural outriders and eccentrics. He’d often tip his cap to Jean Cocteau in interviews, leaving the impression that he was slightly envious of him.

Because massive success has, of course, created a cage of preconceptions for Armani. But his collections usually contain nubs of self-revelation — almost like he's saying, “This is who you think I am, but I can actually be that as well" — which is why it pays dividends to approach his clothes with virgin eyes. See them like you’re seeing them for the first time. The stuff he showed today was a good place to start. It was a collection that combined athletic ease with the casual-luxe that has always been Armani’s calling card, but there was news if you cared to look: the jackets cut shorter and high in the back, the trousers with ribbed cuffs, the complete absence of shirts (let alone ties), and the appealingly worn quality that came from washing vicunas, alpacas and skins.

Burroughs was very attached to North Africa. The navy of desert skies, the blues of the Tuareg, have shaded some of Armani’s most successful collections. That palette was enriched here with brown and dark, bruised purple and mulberry tones. The clothes were, if anything, even plusher than usual. Burroughs was a great connoisseur of male beauty. It wasn’t hard to imagine what his response would have been to any of Armani’s models draped in languid swathes of supernally sensual cloth. The designer called his new collection Disconnected Thoughts but it really seemed like the product of a remarkably consistent, ultimately irresistible one-track-mind. 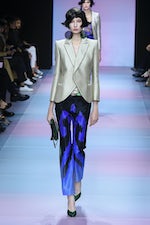 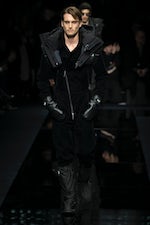 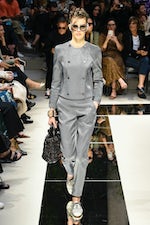 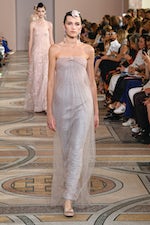