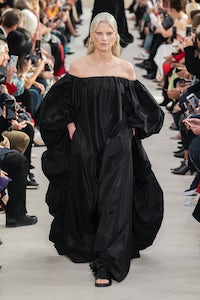 PARIS, France — Designers’ inspirations are a wayward affair. What on earth would steer Roman Pierpaolo Piccioli to American Hervey White, an obscure early 20th century Utopian whose free-spirited artistic community in Woodstock anticipated the famous rock festival six decades later? Ours is not to reason why, ours is simply to accept the fact that White triggered Piccioli to create the most gorgeous collection we saw on this Sunday or any other Sunday in the immediate future.

Still, you want to know how Hervey White shows up in a Valentino collection in 2018? Figure that his community was an offshoot of the Arts and Crafts movement that was reshaping European aesthetics at the time, and they loved the sun rising.

Now check Piccioli’s dominant motif: a fan of sunray pleating on the bodice of everything from a monastic black silk cotton dress to Adut Akech’s dramatic chiffon closer. One pleated top and skirt, in white, was accessorised with a sturdy leather tote and sandals. Hyun Ji Shin looked like an Arts and Crafts vestal virgin.

It was actually quite easy to imagine Piccioli’s women living on some bohemian commune in the long ago. Kristen McMenamy opened the show (it is now mandatory to parade an iconic face from catwalks past) like an artist’s muse in full (black) sail. She was followed by more black-clad models, whose rigorous but sensual garb embodied Piccioli’s art. But so did the dresses that collaged cotton, silk, velvet, and sequins together, in rococo fantasias that simultaneously had the simplicity of a t-shirt and the complexity of a couture gown.

Accessorised with a woven straw basket! Steeped in Valentino’s couture culture, Piccioli insisted it was his mission to escape exclusivity. Every look, however majestic, was accessorised with sneakers or sandals. Admittedly, the latter were feather-trimmed, but you could clip the feathers off. Not so easy with the logo sweatshirt, also trimmed in ostrich plumes. Good luck with that on a full wash cycle.

That aside, the glory of Piccioli’s collection was its easiness. Sure, the detail was delirious, obsessive, but the afterglow was a clear, strong vision of contemporary beauty and elegance. Klaus Nomi and Kiri Te Kanawa were on the soundtrack. Klaus would have loved that.