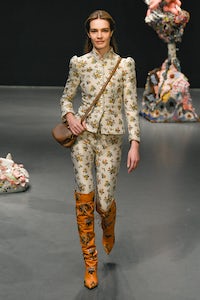 NEW YORK, United States — The love affair between fashion and the art world stepped up at Tory Burch’s show on Sunday morning. Eleven sculptures by Francesca DiMattio were placed throughout the galleries of the Sotheby’s auction house on Manhattan’s Upper East Side. Burch bought DiMattio’s first sculptural creation in 2012, and they’ve been looking to do something together ever since. The fact they felt this was the right time seemed significant. “She-Wolf,” DiMattio’s most dramatic piece, slammed totems of domesticity and femininity – porcelain flowers, chintz – up against chunks of what looked like congealed lava.

You could scarcely have wished for a better visual metaphor for what Burch defined as the enduring struggle for women artists to be recognized. And, with women’s rights generally under heavy manners, it was especially timely. “Women not behaving politely,” said Burch. Yeah, we were there for that. “I’ve waited for this day in many ways for a long time,” Burch added. In the past six months, she’s felt confident fully integrating her foundation into her company, supporting women on every level.

It would have been interesting to see how that confidence transferred to a collection of clothing, especially when Burch mentioned her curiosity about what women she admired would wear when they had to go into a boardroom. There was a hint of kickass there, and the ironically decorous floral prints that DiMattio supplied were ripe for subversion. “We put on the high boots and that was it,” said Burch.

But was it? “It’s not about aggressive clothes,” she continued. Yes, there was an essential dialogue in the collection between hard and soft, masculine and feminine, leather and lace — a plissé-skirt-and-sweater combo embodied it — but Burch was insistent that was all about de-stabilising set views on what “feminine” means.

What it actually made me think about was Karl Lagerfeld’s cinematic vision of Chloe hundreds of years ago, the highwaywoman in thigh boots versus the romantic heroine in virginal point d’esprit organza. A happy memory, but a distinctly fashion one, at a time when we’re craving ways for fashion to assert its relevance in the real world. Rnb singer Alice Smith performed Q-Tip’s hip-hop re-vision of “You Don’t Own Me,” a proto-feminist declaration of independence from way back when. Tory Burch is reaching for something. Let’s hope she finds it.