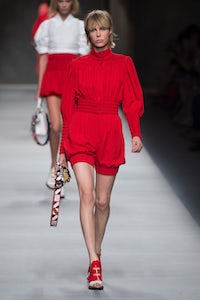 MILAN, Italy — There were concrete trees growing from the walls. The catwalk was concrete. So, to all intents and purposes, was the invitation. “The aggressivity of the environment is opposite to the softness of the clothes,” Karl Lagerfeld offered after his latest show for Fendi. The solid linear planes of grey were in direct opposition to the roundness of puff sleeves, the curvy bubble of little skirts. The mechanical anonymity of concrete was also the polar opposite of the collection’s artisanal effects: the pleating, smocking, whipstitching and basket-weaving that added a peculiar folkloric flourish.

Toughness vs femininity was another of the oppositions Lagerfeld spoke about. There was, in fact, a subtle militancy to the collection, with its palette of black, army green, air force blue and Soviet red. A couple of outfits sported breastplate-y things which could be construed as referring back to the idea of protection that was a component of Fendi’s Autumn collection.

Lagerfeld wouldn't have liked that suggestion. He saw this Spring collection as the inverse of Autumn, where he was drawn to the linear, the long, the womanly. Here, the first look was Edie Campbell in a red romper suit, which established bloomers as one of the collection’s tent poles. Bobby pins in the hair underscored a girlish air. On the other hand, high necklines and those puff sleeves were Victorian-governess-y. “No, they weren’t,” Lagerfeld countered impatiently. “They’re not Victorian at all. High necks are my speciality. I wanted shape with lightness. When tradition meets the future, you don’t know what period anything is from.” And you’d scarcely care if it wasn’t for the fact that those damn sleeves were so inescapably suggestive. The bloomers weren’t much help either. This was clearly one instance where opposites distracted. A rare stumble.

But it has to happen some time when you’re as wedded to forward momentum as Lagerfeld. “I love change,” he declared. “The only thing that doesn’t change is me.” Yep, that’s his photo in the dictionary under “incorrigible.” 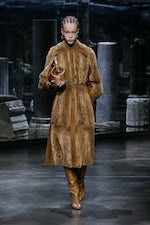 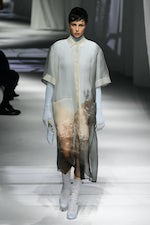 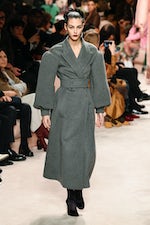 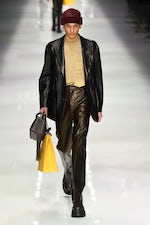