NEW YORK, United States — Even with the return of Proenza Schouler and Rodarte, Tom Ford’s Park Avenue extravaganza and Ralph Lauren’s 50th anniversary blowout, the centrifugal force that once held New York Fashion Week together seems to be losing its strength; the glue that once made the chaos cohere is gone.

That’s not necessarily a bad thing.

In fact, it’s a potent reflection of the fractured nature of the industry at large, where these days there’s an undertow of panic beneath every placid front row smile. Plus, the messiness and jagged edges — the oddball upstarts bumping elbows with global behemoths — have a distinctly American flavour. Remember when the shows moved to Lincoln Center and everyone thought the whole affair reeked of commercialism? Selling clothes, how gauche! Now people complain it’s too rinky-dink. You just can’t win. 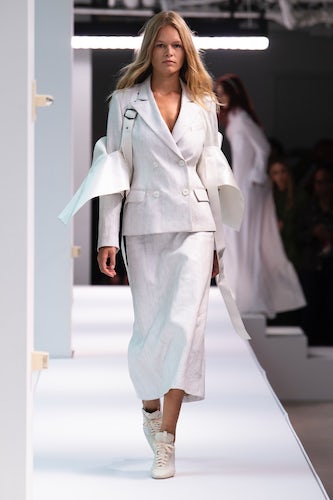 On Sunday, the elusive thread that ran through the Spring/Summer 2019 collections turned out to be a question: where do brands with potential go next? There may never be another Calvin Klein or Ralph Lauren. So, what do you aim for if you've got a couple of solid seasons under your belt, you’ve had your big splashy Vogue feature, you’ve gotten your CFDA nomination (maybe even a win!) and you have the right retailers? What comes next?

Beyond his eye for colour and sumptuous textures, Sander Lak of Sies Marjan has a real feeling for shapes that are elegant but not too prim or fussy. He’s a real designer’s designer; he doesn’t bother with the overblown backstories. Instead, it seems the design process itself is the point. As a result, his collections feel very complete, and when he does things like include hanging straps off a pair of handsome patchwork cargo pants or includes off-kilter ruching on a Breton striped sweater, it doesn’t feel tricky or over-designed, but essential.

The collection was shown around the perimeter of a second story aerie in a midtown office building and featured friends of the brand along with employees, models like Kaia Gerber and Sasha Pivovarova and even Lak’s own mother. He said he wanted the collection to convey the idea of New York as adopted home (he’s Dutch), to capture his memories of his father and to radiate optimism (the finale was accompanied by the song “Shining Happy People”). He succeeded and then some.

There were many highlights, particularly the off-handed sensuality of two shirt dresses shown early in the collection, one in crinkled white cotton and another in a flesh-toned knit, and the erudite glamour to the deconstructed suiting in cherry red, lavender, and royal blue. A section dominated by pinstripes and undone tailoring felt like American sportswear but seen through his distinctly European lens; the menswear was both bold and wearable; and the pleated satin pieces with undulating hems that closed the show were flirty without being kitsch. 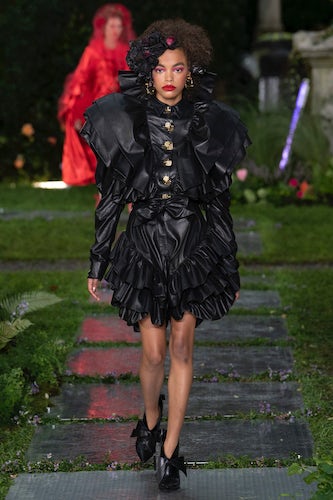 More than one person said he should design, or at least consult, for a big-time fashion house, but he’s still building his own brand and there’s time for all that later. For Lak, who won the CFDA Award for Emerging Talent earlier this summer, you prove your mettle by digging in and making great clothes. If that sounds obvious, you’d be surprised at how few young designers are out there doing it.

Sisters Kate and Laura Mulleavy of Rodarte returned to New York after decamping for Paris for the past three seasons. That it was raining during their show in an East Village garden made some in the umbrella-holding audience groan, but if you could get past the drizzle, it certainly added some otherworldly atmosphere to the line-up of ornate dresses.

The big takeaway here was the exploding silhouettes, from the voluminous tiers of black and red leather that opened the show, to the poufs of tulle that gathered at shoulders and elbows later on. Column dresses were meticulously beaded and wrapped in bands of delicate lace and tulle, like French pasties. Crocheted dresses had a play doll quality to them. In fact, dolls popped to mind many times throughout the show, as well as tacky prom dresses (especially when a frilled and ruched purple lamé number came out), flamenco dancers, Dias de los Muertos, mid-century haute couture, Christian Lacroix’s 1980s maximalism, and Miss Havisham — which is to say there was a lot going on here. Perhaps it was the grey mist which lent the garden a graveyard feel, or the roses braided into the model’s hair, but there was a whisper of darkness under all the frou frou, which added a subversive twist to what could have been a one-dimensional princess fantasia.

“I see things speeding up, and that makes me want to pare back,” said Laura Mulleavy post-show. “I want to say, pay attention to what we do, it’s special.” At their best, the sisters deliver a strange sort of romance, a vision that is not being offered up anywhere else. But sometimes these pieces can feel overworked or out of step with how women dress today — who’s wearing some of these fantastical creations? And to where? 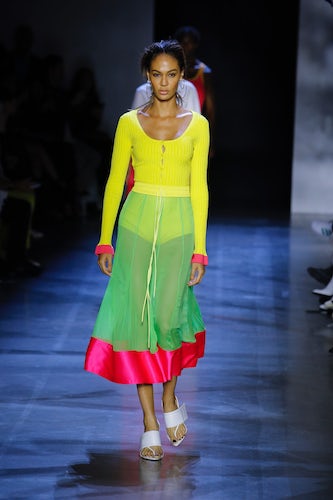 At one point, Laura mentioned trying to find something that’s so wrong it’s right. “We learned that when something seems wrong, it triggers a thought that’s like, come back to it, maybe it’s just new to your eye.” There were moments like that in this collection, jarring colour combinations or those lamé pieces, that pushed the idea of good taste to its limit. But as Diana Vreeland once said, “Too much good taste can be boring,” and no one could accuse the Mulleavy sisters of being boring.

Prabal Gurung dropped the political messaging that’s been at the centre of his runway presentations for the past few collections and was better off for it. In front of an audience that included Whoopi Goldberg, Tiffany Haddish, Victor Cruz, Awkwafina, and many others, Gurung had a strong showing that married colour and silhouette in a sexy and upbeat way.

Gurung’s strongest pieces here were the neon fine gauge knits, like the chartreuse bodysuit he opened with, paired with a liquid-y sheer lime green skirt edged in fuchsia satin, a body-skimming number in ruby red, and a lean chevron printed sweater in citrus tones with fluted sleeves. His cropped cargo pants were great, too — paired with everything from obi belt-tied blazers to a navy cashmere sweater featuring jangling coin embroidery.

He deftly incorporated sportif elements like windbreakers, drawstring tied dresses, and an ombre dyed hoodie worn with a feathered skirt. The coin fringe and ombre dyeing motifs, combined with a black dress that featured traditional Nepalese embroidery and the sarong skirts, all added subtle hints of exoticism without ever being too heavy handed. He could have done without the half-and-half mash-up tailoring and the silk faille gowns with sculptural waist details, but otherwise it was a strong collection that felt languorous, spirited, and confident. 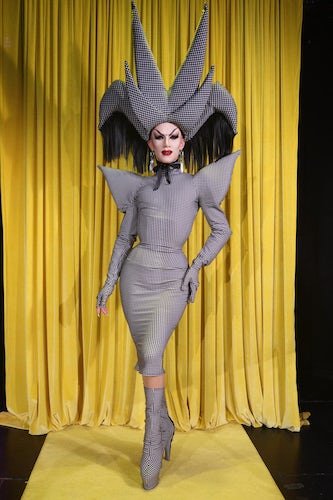 The clothes weren’t really the point at Humberto Leon and Carol Lim’s Opening Ceremony presentation. Their collection was presented as a drag show, with an emphasis on the show portion, like they just wanted to give us some entertainment in the middle of a hectic week. So, we had Sasha Velour, with her bald head and Dr Spock eyebrows, hosting a string of drag queens’ adrenalised lip-syncing for an audience that included Nicki Minaj and Troye Sivan.

Leon and Lim are confident enough to avoid the hard sell. What was shown was typical OC fare: sporty ski bunnies in windbreakers and track pants, baby doll tops with frilly edges, and childlike prints like rainbows and waves and a section of black, sexy dresses, all with an undeniably hint of the 1990s. But the big reveal of the night wasn’t the clothing but Christina Aguilera as the surprise finale, proving her pipes are still very much in working order.

More than the clothes, Opening Ceremony’s point was to create a feeling of inclusivity and family, especially with regard to the LGBTQ communities. That earnestness can come across as too aw-shucks in such a cynical industry, but here it was presented with such enthusiasm you just had to give in and let the good feeling wash over you.

Despite all the naysayers and complainers, this wasn’t such a bad day for New York Fashion Week. Turns out the old girl’s still got some life in her yet.