PARIS, France — After his show on Tuesday, Heron Preston was remembering the days when he started streetwear brand Been Trill with Virgil Abloh and Matt Williams. He compared them to a boyband whose members have all gone solo. And now they’d all descended on Paris. “It’s like when the Japanese arrived,” said Preston. Trailing clouds of controversy too. Heron heard someone saying, “Virgil ruined streetwear when he went to Vuitton.” Hardly, though there’s no escaping the fact that one of fashion’s big questions is “Whither streetwear?” Preston on Tuesday and Abloh, with his Off-White show on Wednesday, both explored possible answers using their own distinct vocabularies. That in itself testified to the evolution and the durability of the category.

And whatever limitations it might have, Abloh has clearly transcended them. The staging of his show was provocative and evocative. The set looked like an urban backlot that nature was steadily reclaiming. The soundtrack opened with the theme from "Mr Rogers’ Neighbourhood," a much-loved children’s show on public television in the USA, and the subject of a highly praised documentary last year. “Childhood memories shape taste,” Abloh said. For his generation, television was a tastemaker, though rarely as benign as Mr Rogers. He called his collection “Public Television,” but one of his new graphics depicted a grasping Big Brother type, “how I depict TV, kind of evil, not serene.” And he considered the tailoring that has overtaken Off-White to be representative of newscasters, the besuited authoritarian figures in collar and tie that he remembered from his childhood. 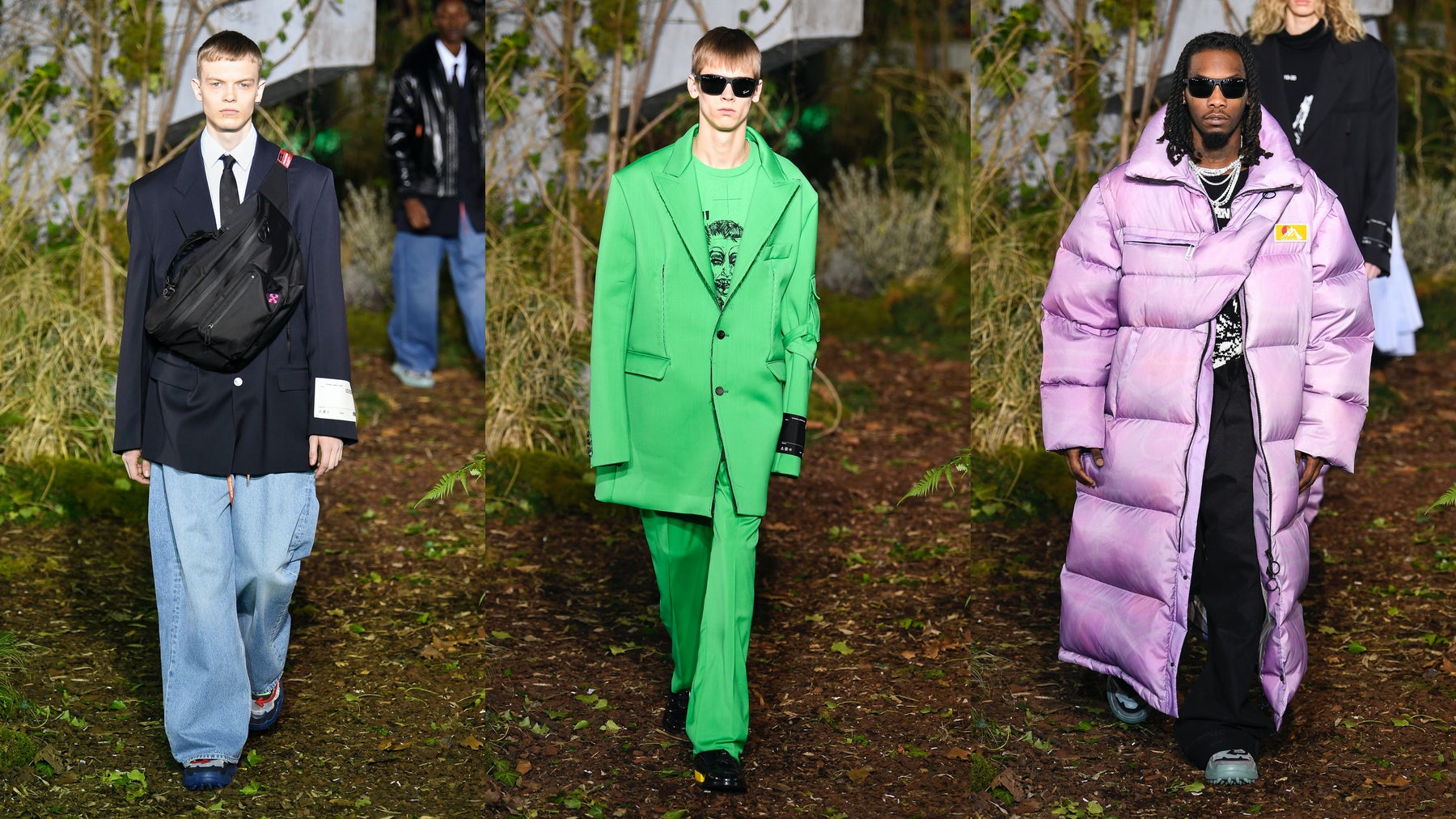 Abloh described the depiction of him as “the streetwear guy” as superficial, and insisted he was moving away from the preconception (“I zig while they zag,” he said). It was tempting to see the “moonlit” finale as his version of streetwear’s twilight. Still, there was enough of it in his new collection to keep his ardent fans happy, especially when the show’s lingering after-image was Migos’s Offset in a massive, and rather fabulous, lilac puffa coat.

More intriguing was conjecture about how many of them would follow Abloh on his exploration of sartorialism. His jackets were generous with wildly exaggerated vents, matched with equally oversized chambray denims. His suits and topcoats were scarcely less roomy, and the womenswear he showed was similarly sized. His rationale for this de- and re-construction was curious: “My generation is now looking under the hood.” In other words, aware of what makes fashion tick, and eager to pass the insights along. “If TV shaped my generation, now we can do that through the images we project on Instagram or wherever. In culture, you’re supposed to lead.” 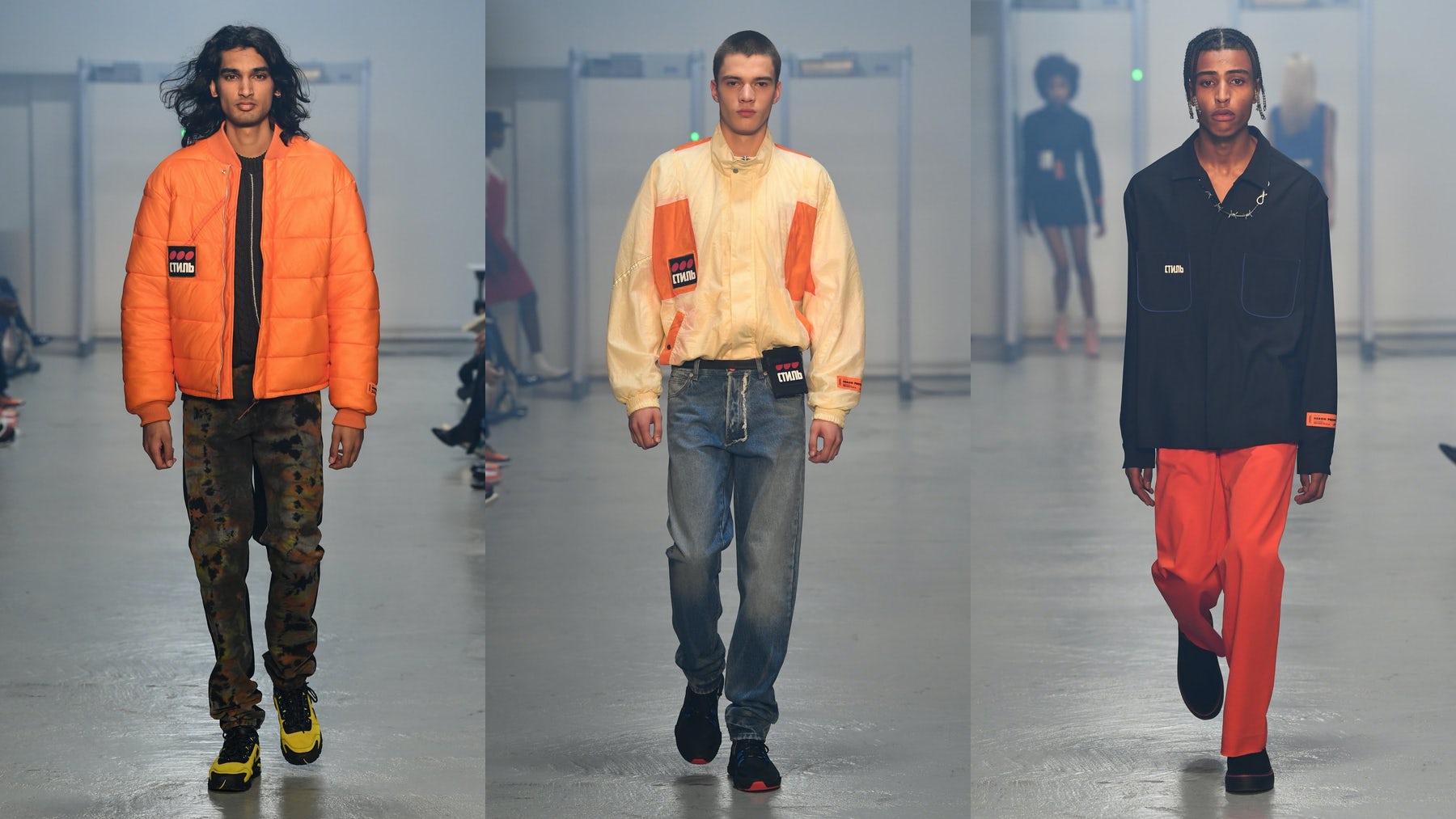 Heron Preston’s show was callow by comparison, only fitting given that it was his first runway show. But leadership was on his mind as well. He titled his collection “NightShift,” a name which cued a spirit of utilitarian workwear that came across as rather basic. Less so were the pieces cut from upcycled military parachute nylon. And Preston was keen to emphasise his use of organic cotton. “I’m a storyteller,” he said. “I want to start to write history in a new way by introducing sustainability to streetwear.” A goal worth saluting.

He’s clearly sipped from the same cup as Abloh. The hazmat orange, the quilting and padding, the wordplay were familiar tropes. Preston also clearly has an evolving sense of theatre. Security procedures attached to travel (particularly the Transport Security Administration in the US) were on his mind when he was designing his collection, so there were security guards and dogs stationed at the entrance of the venue, and the models walked out onto the runway through metal detectors. The theatre may have been too subtle for Paris, which has its own security jitters at the moment, but it was off-kilter enough to underscore Preston’s promise.