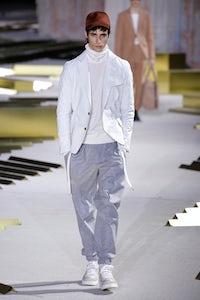 MILAN, Italy — Returning to Zegna and Milan after five years working for Berluti in Paris, Alessandro Sartori was struck by one major change. Maybe 50 percent of the people in the company were new to him. And they were so young. But their understanding of their craft was way beyond their years. Gildo Zegna had done a remarkable job of refreshing the family business in Sartori’s absence. And, as he said after the designer’s debut as creative director on Friday night, Gildo never doubted that Sartori would eventually return. “I never stopped flirting,” he said cheerfully.

Sartori gave him 46 reasons to be cheerful, 46 looks making up a collection that did indeed feel like Zegna refreshed, modernised and made utterly desirable to a challenging new world. fabric technology has always been the foundation of the family business. It was Gildo’s first love. As glorious jacquard after jacquard paraded past, he was in raptures. He’d bought ten old looms in Japan that Zegna had applied new technology to, a slow, labour-intensive process that yielded fabrics they’d never been able to make before. “I was spending too much time on structuring and organising,” said Gildo. “Now I’m back to my roots.”

But there were other fabrics that were just as enthralling: a felted cashmere; a casentino woven from cashmere and alpaca, with a bizarre but appealing pilled surface; skins treated only with vegetal wax, softer and lighter than silk; pelle tessuta, a material woven from a “spaghetti” of leather. “No more fabrics that look ‘vintage’,” Sartori said. Recognising that these things needed to be touched to be fully appreciated, he made tableaux vivant of his models at show's end so the audience could get their hands on the clothes.

Sartori has evolved distinctive signatures from his first stint at ZZegna and through his time at Berluti. He favours soft tailoring, completely deconstructed, jackets, coats, leathers, everything. Here, trousers were either lush trackpants or generously cut in a 1940’s film noir proportion that Sartori used to great effect in his days at ZZegna. There wasn’t a shirt (or tie) in the collection. Instead, tunics, or trim knits with large roll-necks. Essentially the way Sartori himself dresses, but with a fluid allure that felt new for Zegna. There’s always been something a touch decadent about what he does — that film noir thing again — but here it found particularly elegant expression in a midnight blue safari jacket with a tab closing (no button again), over a languid V-neck tunic in the same shade.

The footwear was a high-top on steroids, or a derby with a sci-fi silicon sole. “A new generation of shoe,” Sartori declared. And that idea — a “new generation” of any item we were seeing, created by Sartori’s new generation of eager young craftspeople — definitely coloured the energy of the presentation. (And such colours!)

But a word that Sartori himself used often in a preview was “conversation.” Like calling his show casting “a conversation between people of different generations”. So there were men in their fifties, like Ingo, who owns a store in Dusseldorf, and Lono, an actor. And there were non-models, including Panayiotos, a photographer in Athens, and Elliot from New York, whose blog @fuckjerry has 10.9 million followers. It was refreshing to see the character in the clothes matched by some of the men wearing them.